Around About | Gathered Round 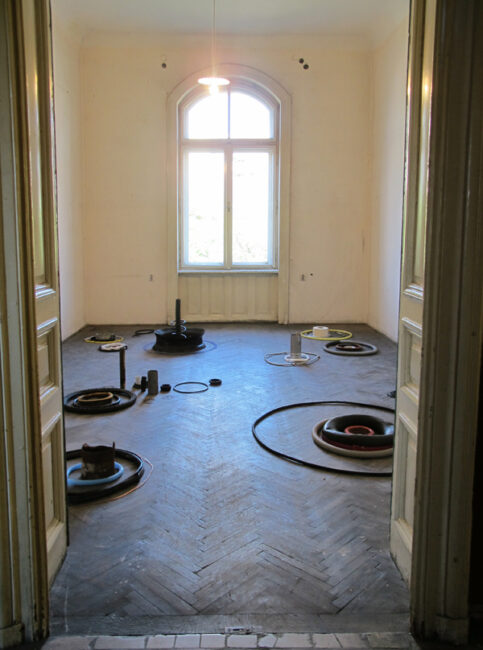 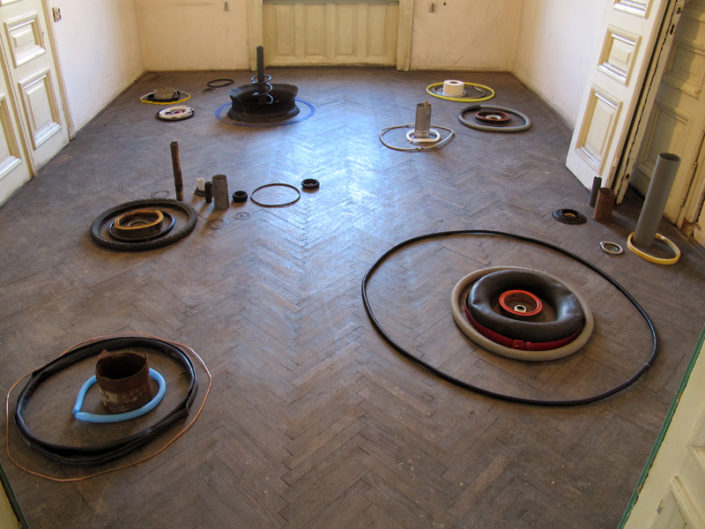 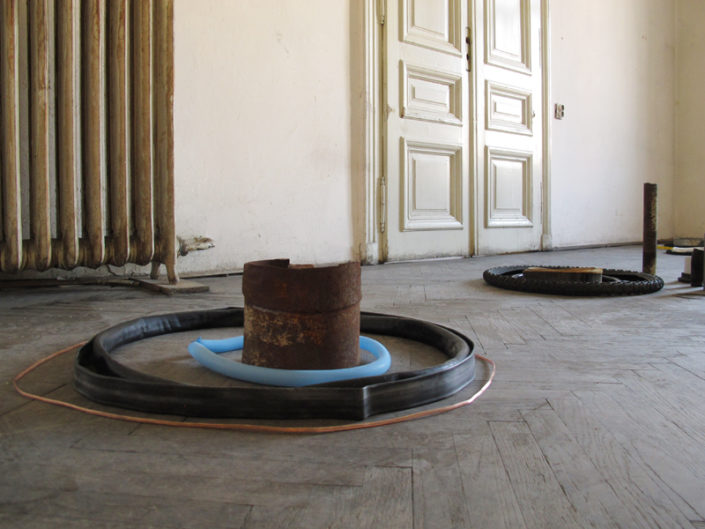 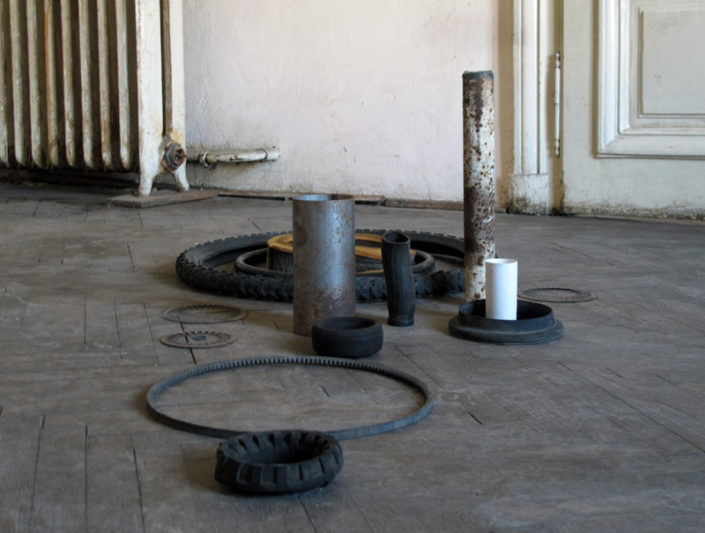 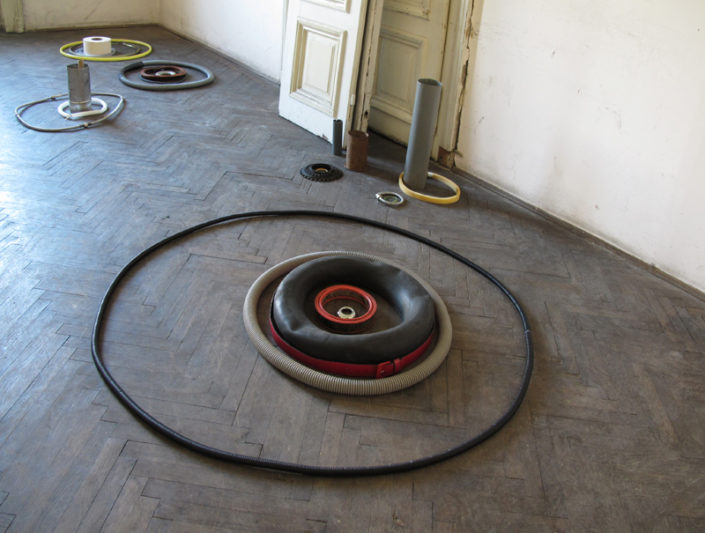 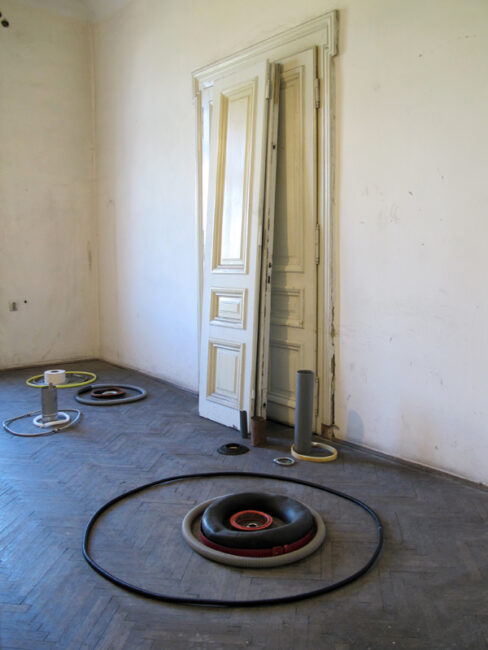 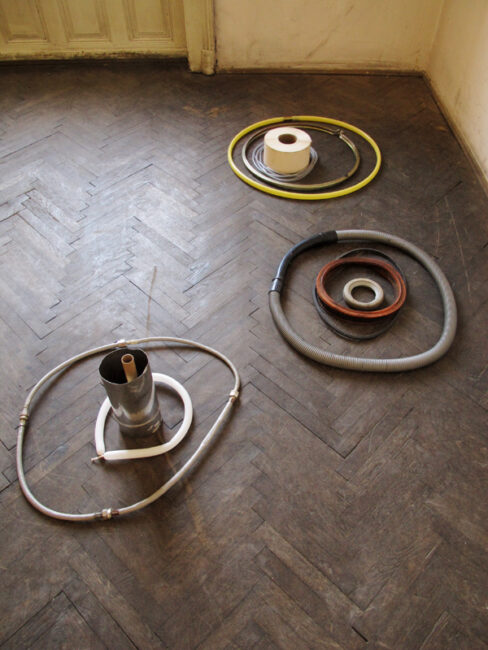 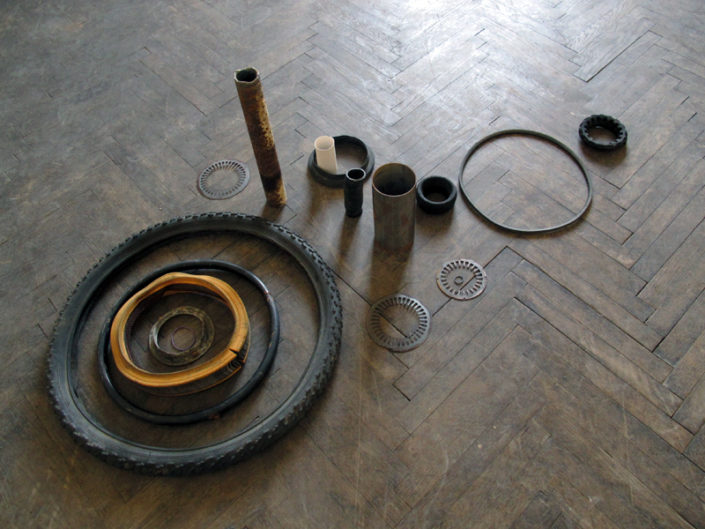 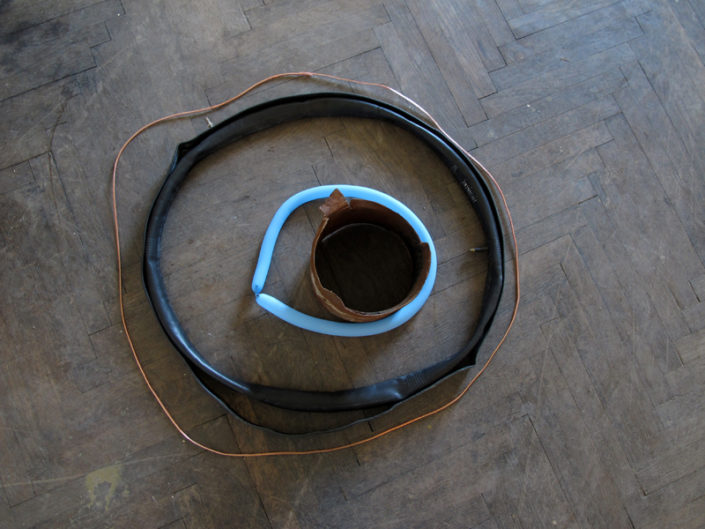 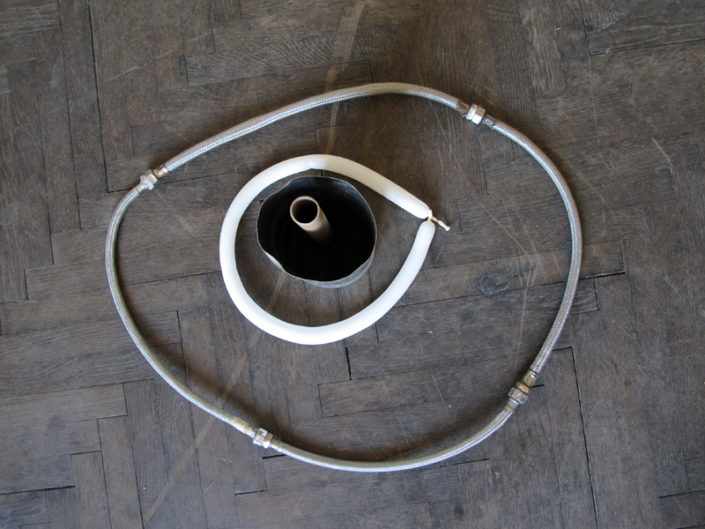 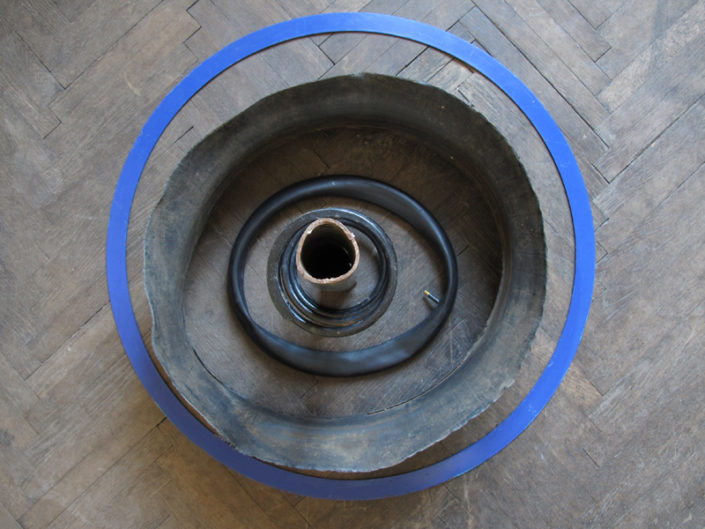 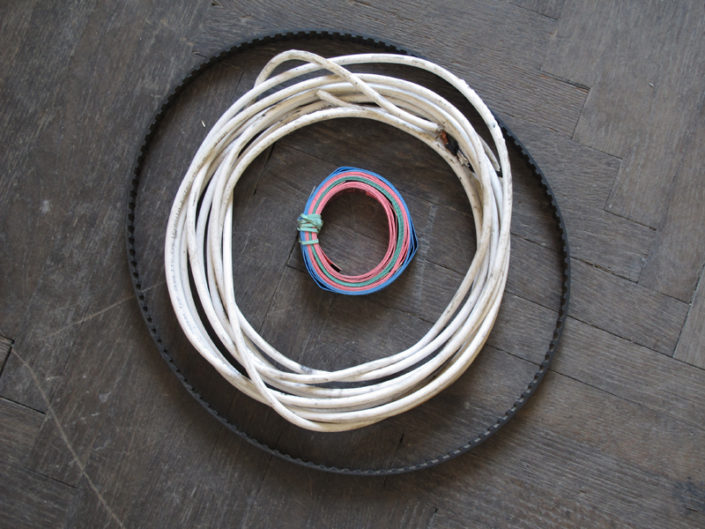 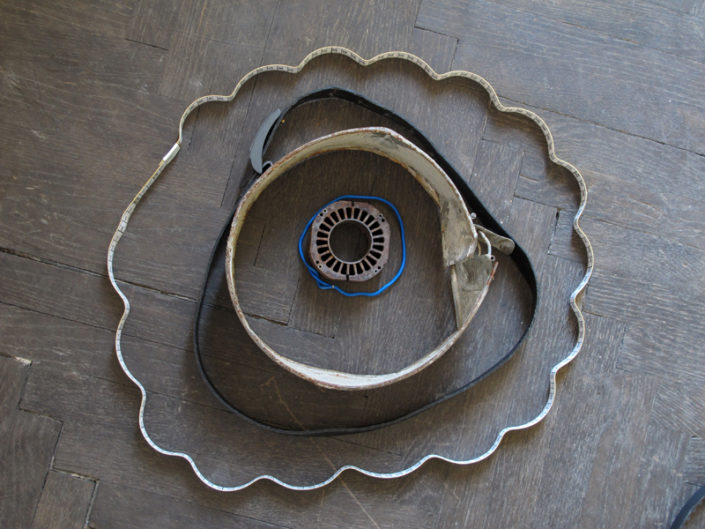 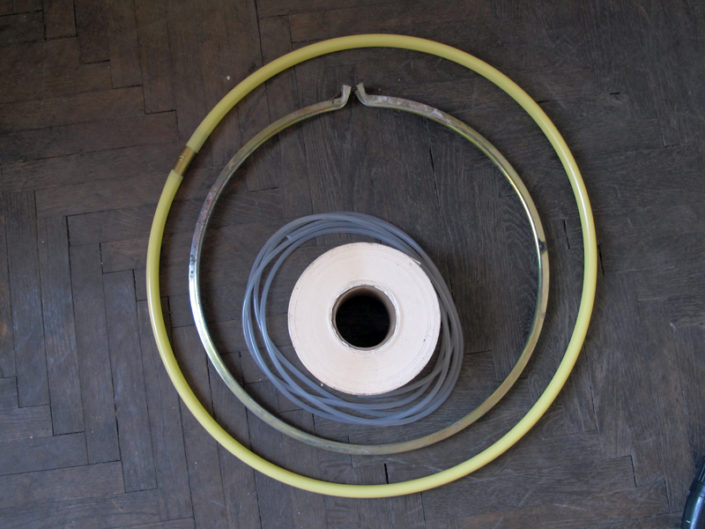 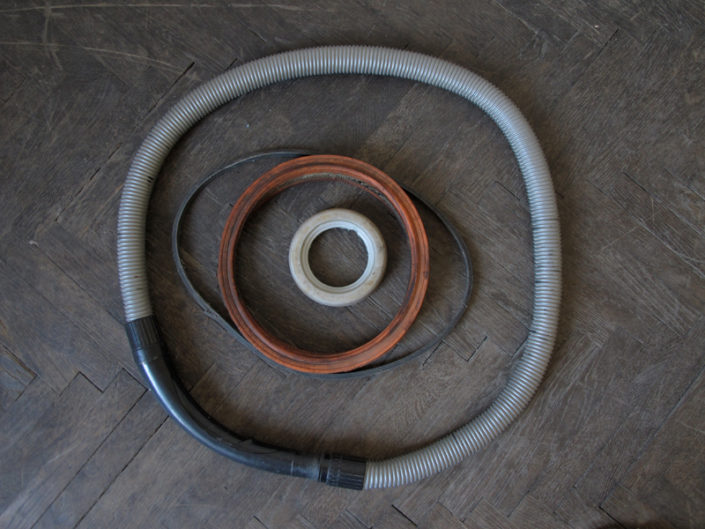 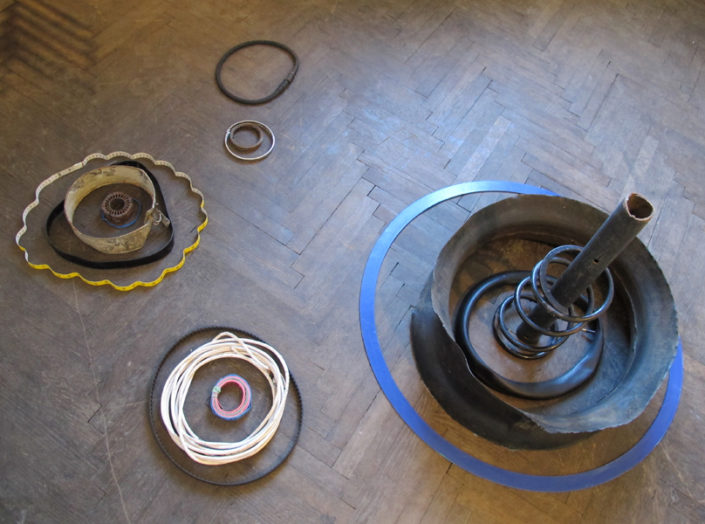 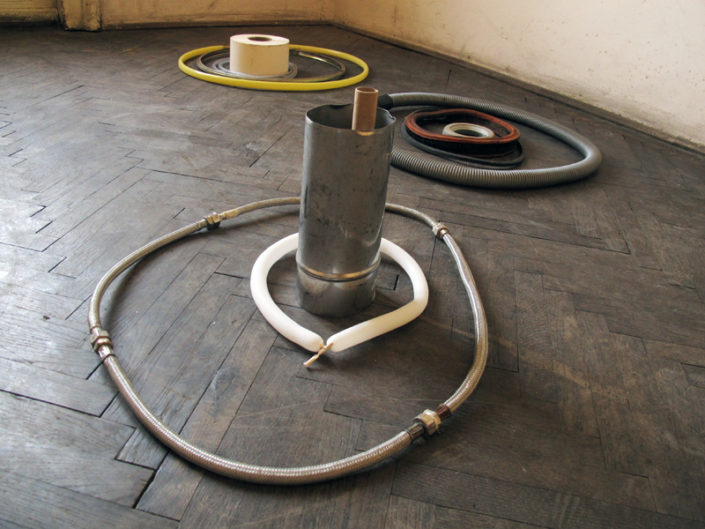 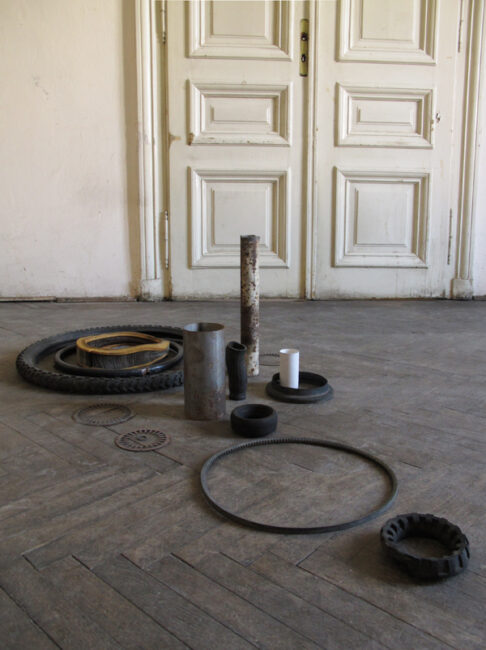 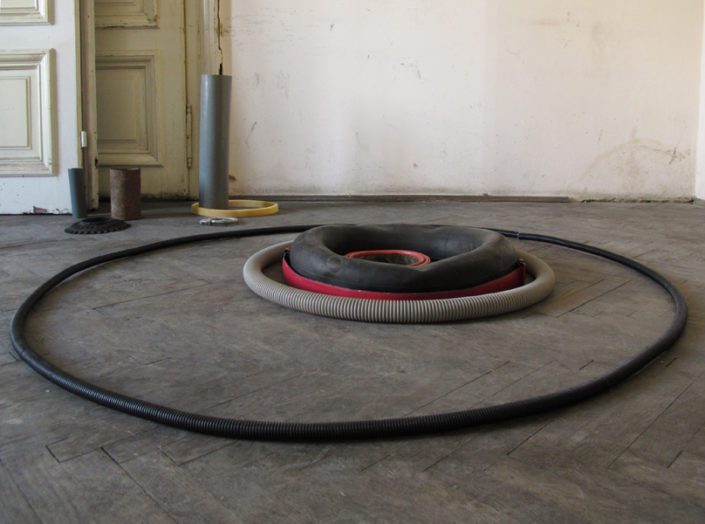 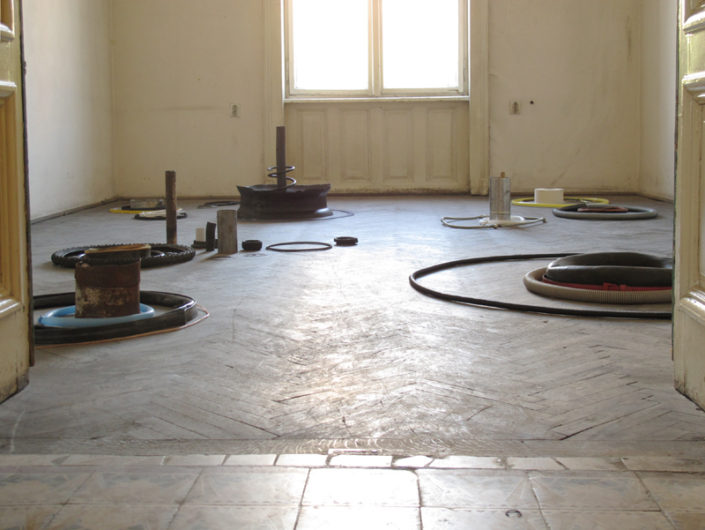 Around About, 2012
Various materials and objects

A floor-based installation comprising several clusters or arrangements of found objects, in which progressively smaller and smaller things are placed inside one another. All of the objects used are loops, circles or ovals – placed on the ground and inserted one inside the other, gradually getting smaller and smaller as they move towards the centre of the arrangement they are a part of. The loops are either intact circular objects, or improvised constructions made by linking together strings, cables and lines of materials.

The act of inserting hollow and circular things into one another muddles the distinct borders between the objects, and between objects and the space they occupy. Exploring the idea of containment and an impossible ambition of attempting to encapsulate and grasp the physical world, the work playfully questions the ways that barriers delineate space and complicates the clear distinction between where one thing ends and another one begins. When an inside of one thing becomes an outside of another, the spatial order is disrupted, and the negative space of a ‘hole’ simultaneously activated and eliminated. The unexpected provisional constellations and meetings between the objects and materials taken from a variety of different contexts bring about a range of new associations, constructing surprising relationships and turning spatial hierarchies on their head. 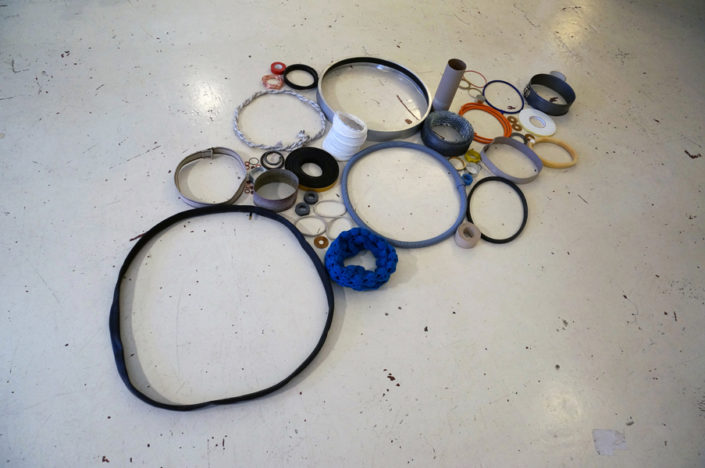 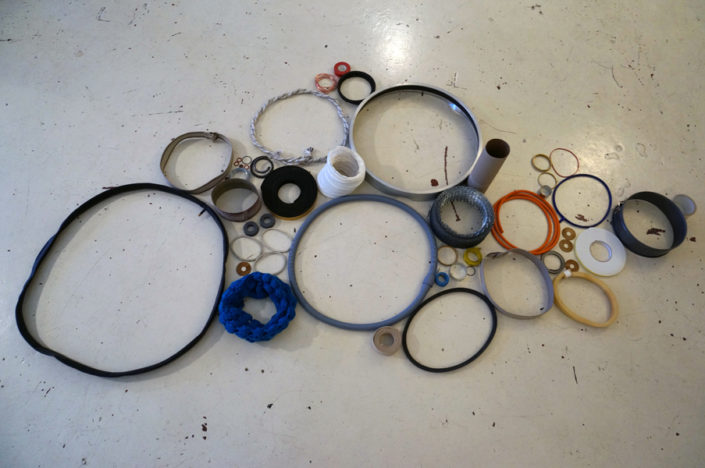 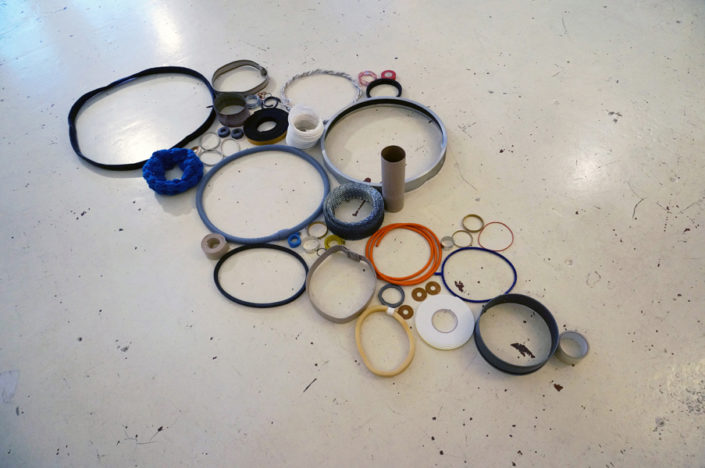 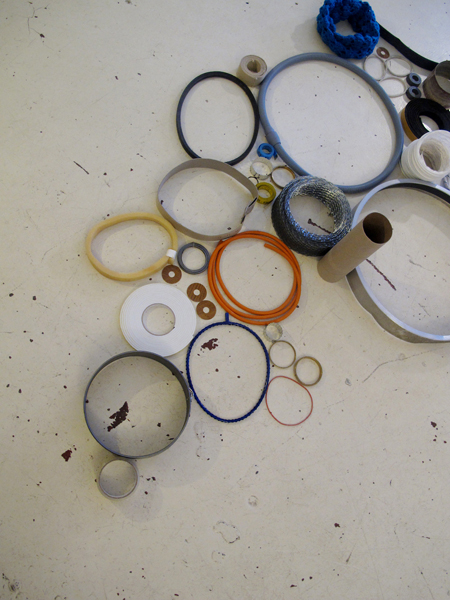 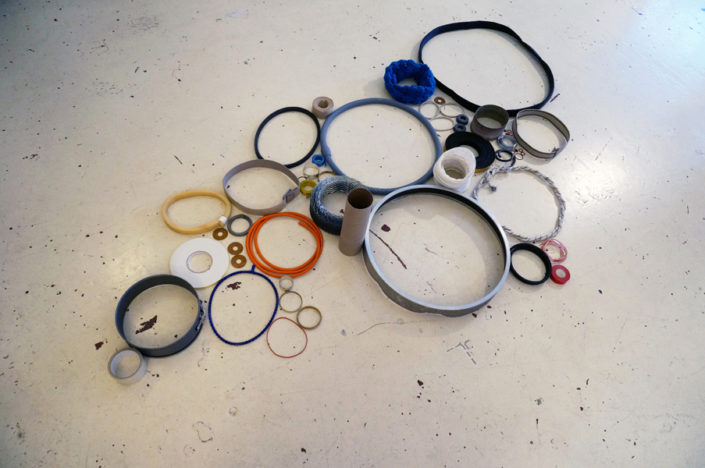 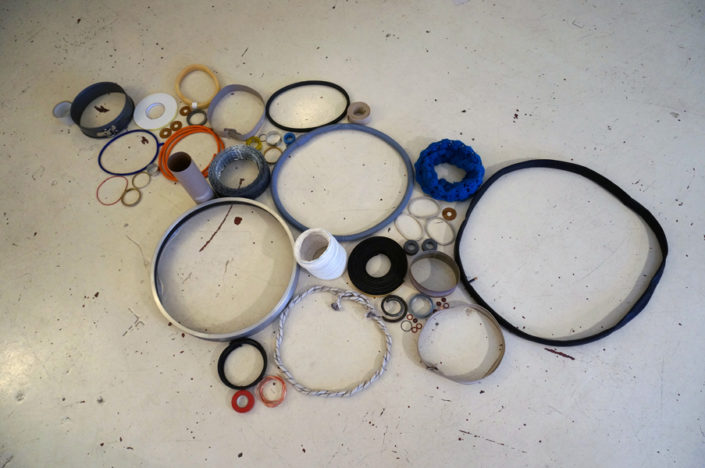 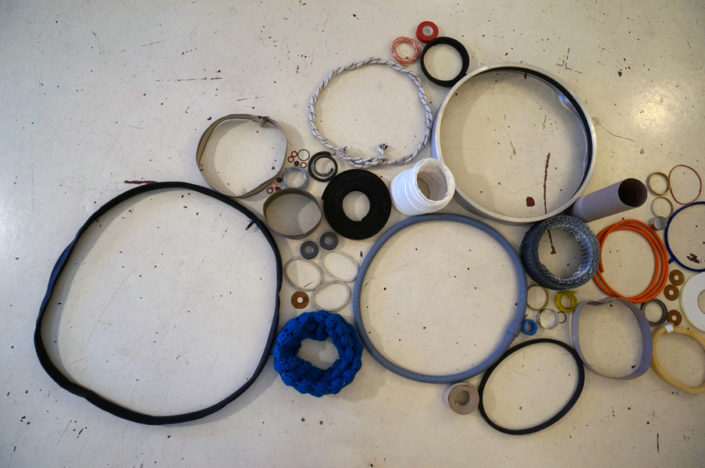 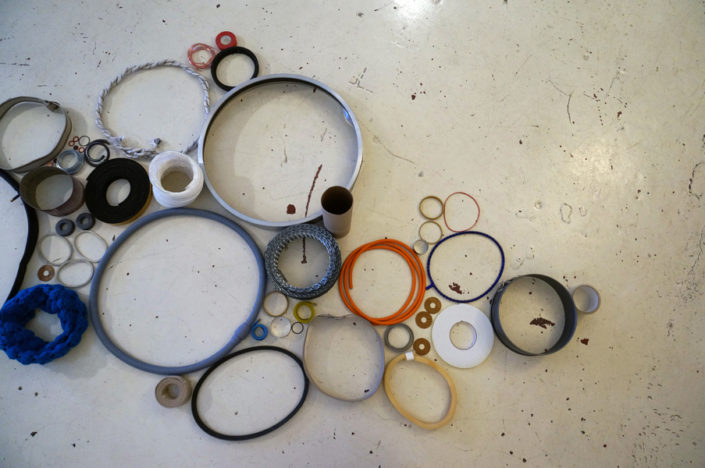 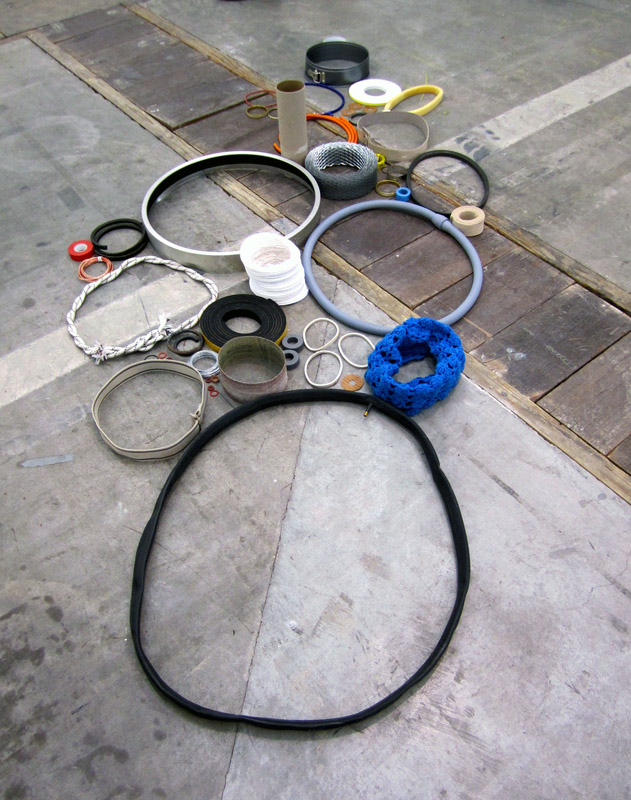 Gathered Round, 2013
Various objects and materials

Gathered Round is floor-based piece comprising a constellation of found objects and materials, all of which are circular. The round objects in the arrangement include recognizable items from everyday life (a deflated bicycle tire, a clock frame, a cake mold, a spool of tape), as well as the more abstract circular shapes and materials (various coils, cables, belts, hoops, and bands) – all displaced from their everyday use and place and repurposed here to create a puzzling floor cluster.

Loops, circles and ovals brought together in Gathered Round are drawn from various sources and contexts – their playful cacophony on the ground offering a referential jumble, as they bring into play associations from a range of varied and disparate places.

On the one hand the work presents an apparent formal game of gathering everything that is round – working with the idea of containment, the question of what can be enclosed or captured within a delineated space, and exploring an impossible ambition of attempting to encapsulate and grasp the physical world by drawing lines and borders in and around it. On the other hand, the piece conjures an image of a landscape – a constellation of islands, ponds, pools, pebbles, bubbles… as well as seeming like a kind of a “growth” on the surface of the floor – a spill, something bubbling or rippling on the ground. The piece becomes a kind of a parasitic presence that alters and enlivens the texture and the fabric of the room’s floor, proposing it as an unsteady, non-solid and porous surface, riddled with holes and openings. There is a sense of something organic, of some sort of “natural formations” displaced in an indoors, built space, and summoned with discarded functional and human-made items – a kind of landscape comprising a detritus of contemporary life.

I’m often drawn to working with lines that imply circular movement – lines and movements that are not linear and direct, but that meander, loop around themselves, are get stuck in a certain cycle of repetition and redoing. I’m interested in how the work creates a kind of a labyrinthine path – whereby the eye can travel around the arrangement, following lines of objects as they connect into circular, winding trajectories.

Circular objects such as the ones used in the piece also interest me because they suggest a space by drawing a simple line – a circumference drawn in space delineates a space, creating with this simple gesture an inside and an outside. I’m drawn to the hollow circles being objects that are made mostly of holes – there is a kind of a paradox in an object that is mostly negative space… All the middles and centers of these loops are empty and the line traced by each of the objects’ circumference essentially encapsulates a hole – making a problem of the empty space within each circle while simultaneously activating it, drawing it into a relation with the ground beneath, which becomes an integral part of the “interior” of these round items, as well as their base.