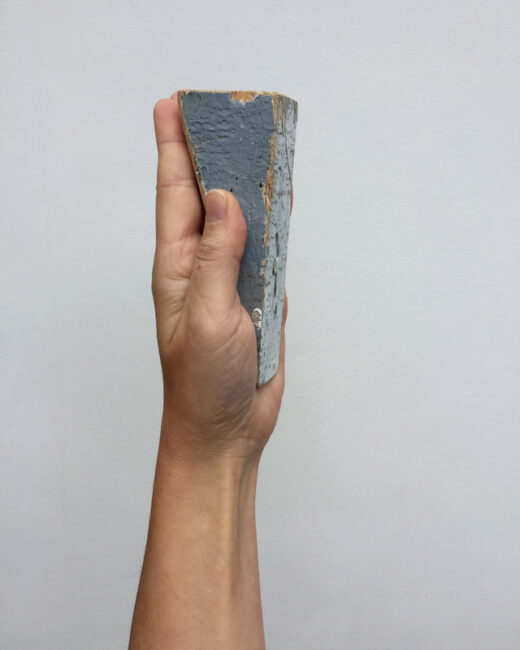 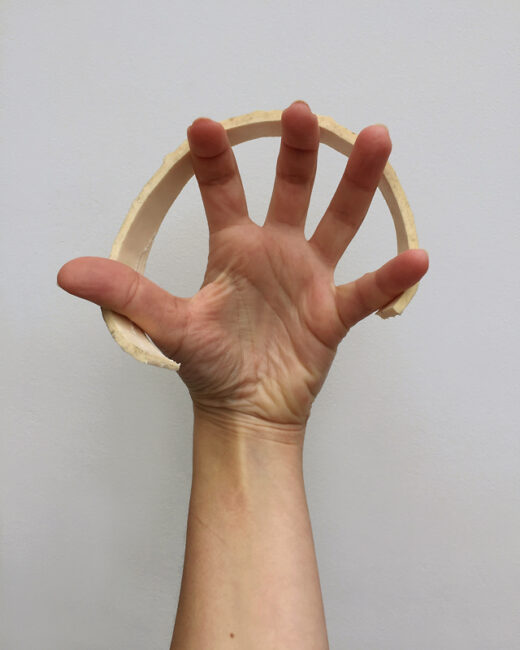 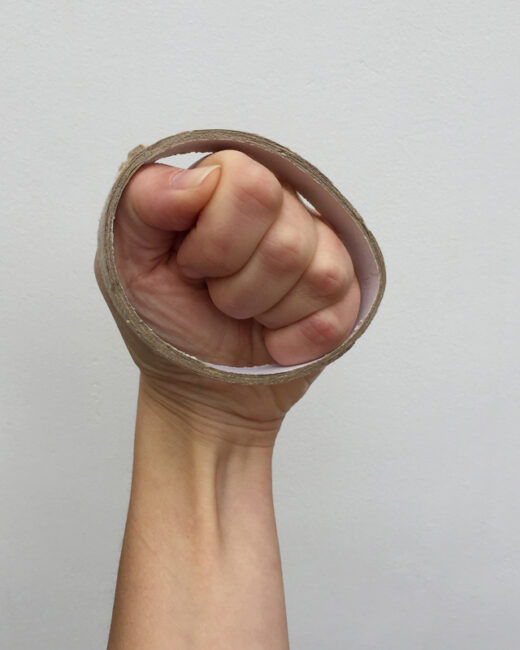 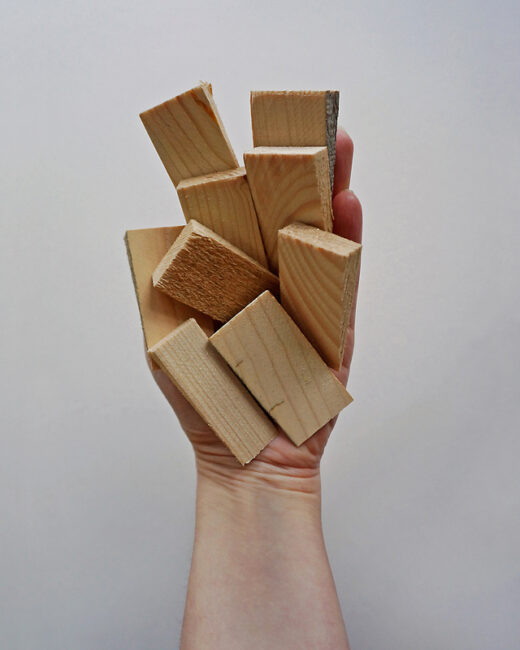 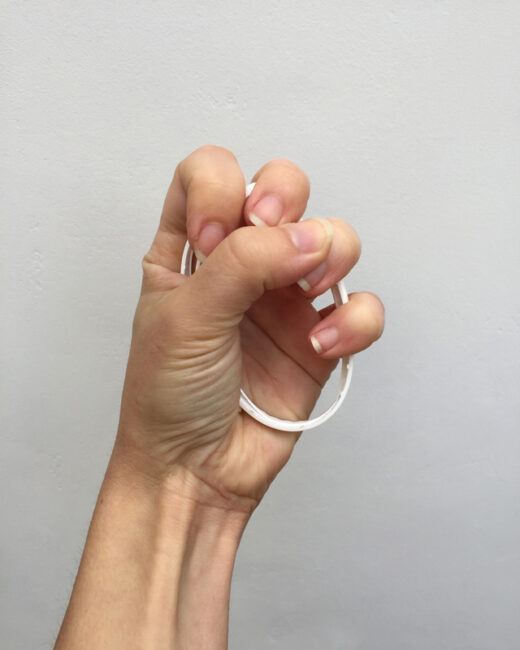 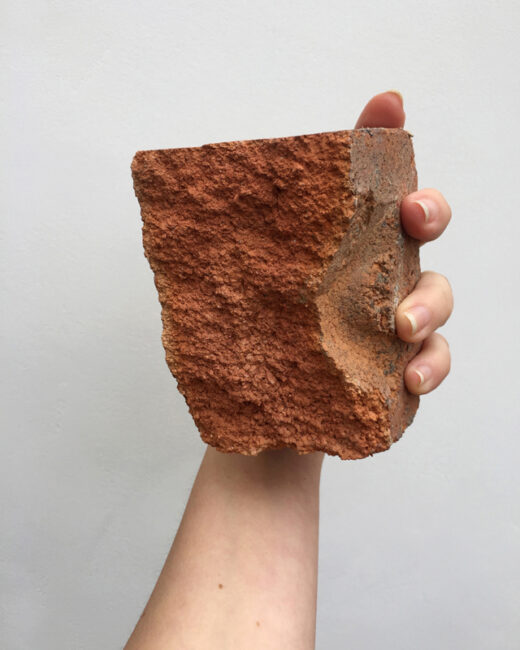 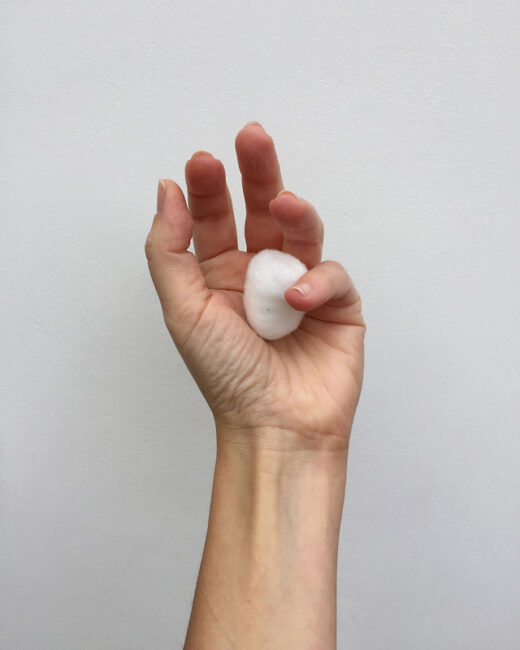 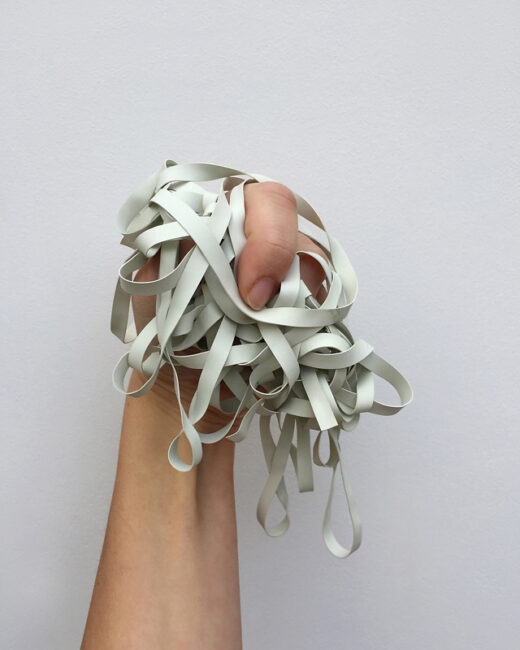 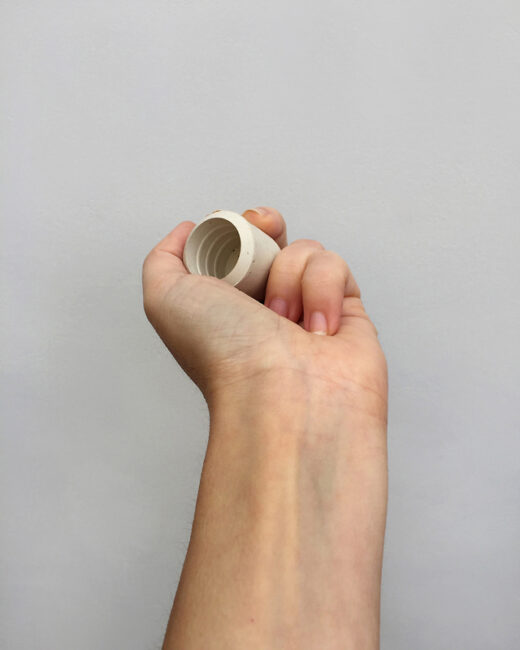 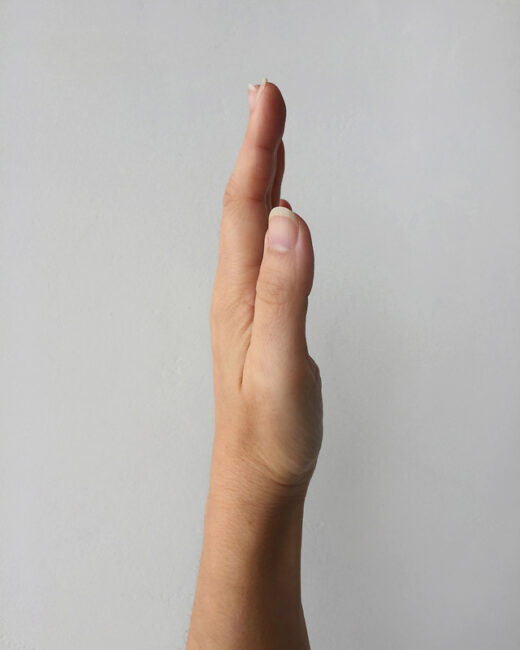 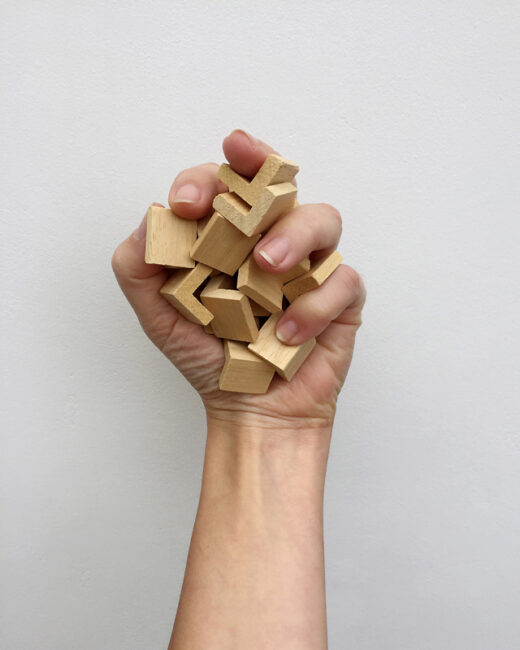 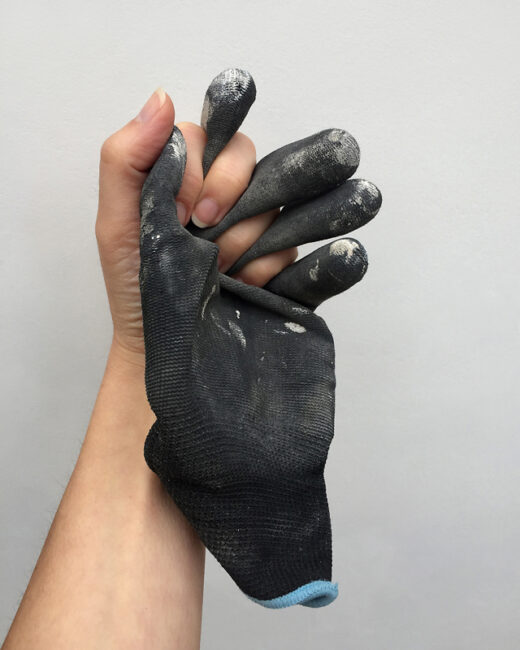 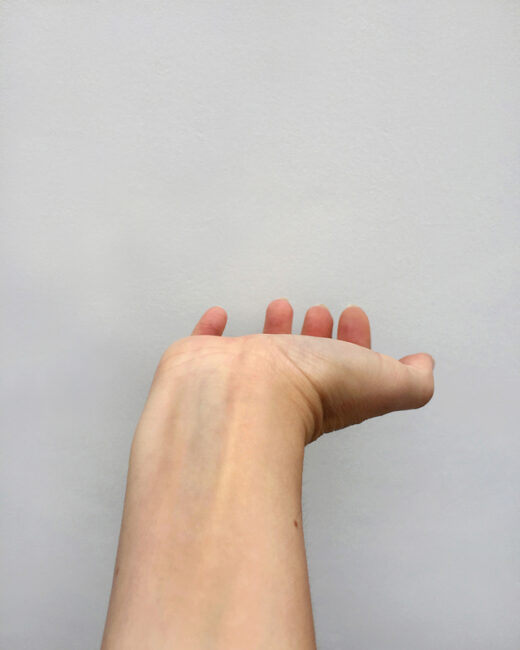 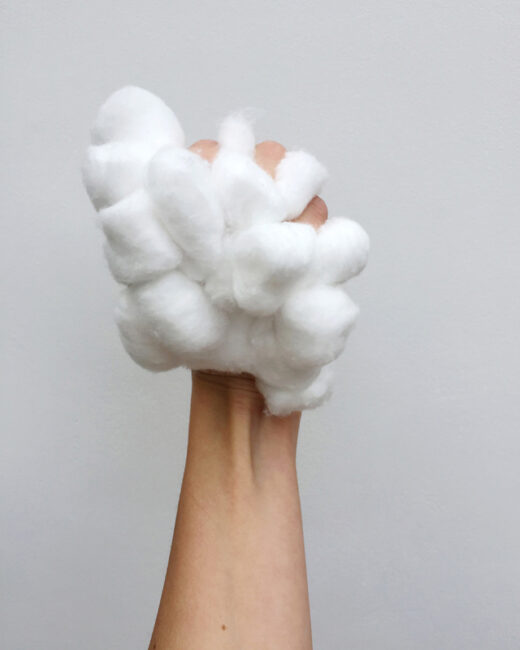 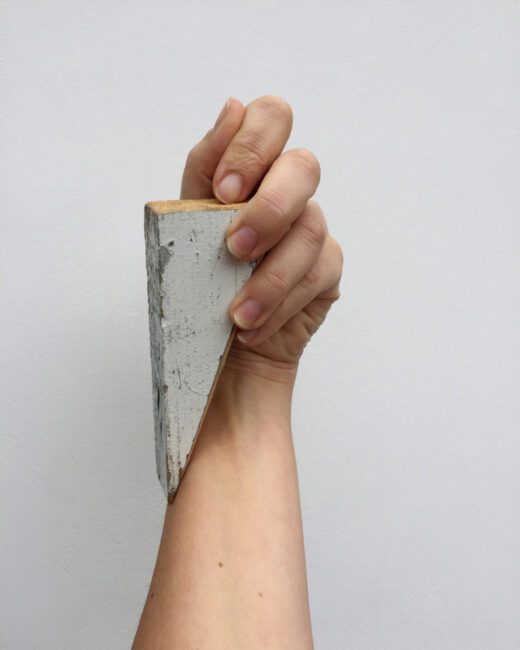 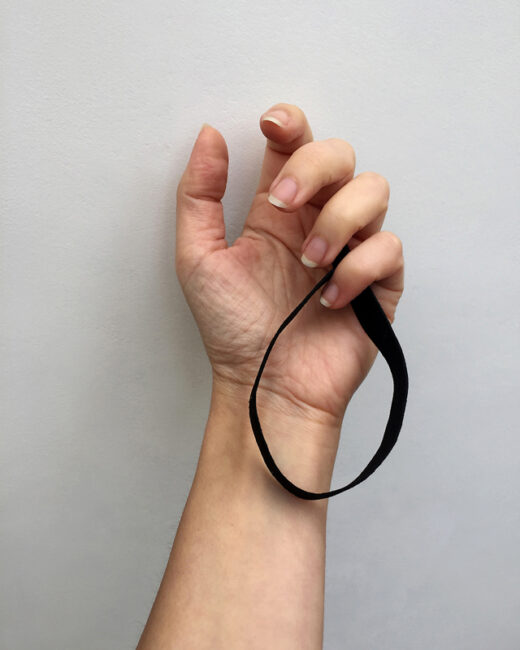 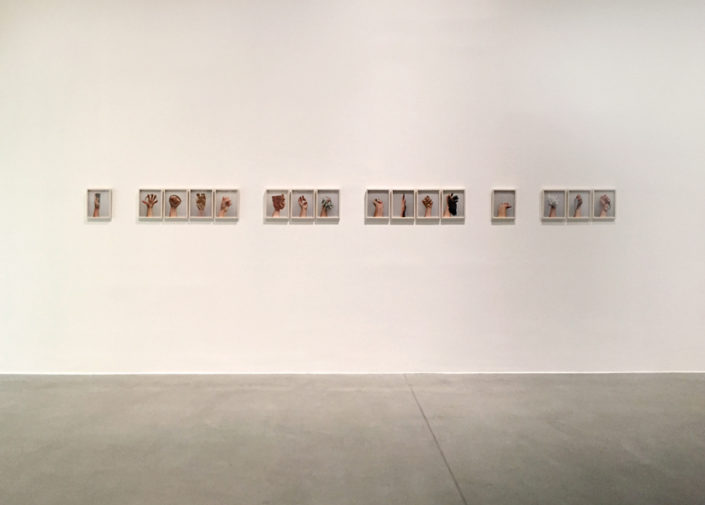 A commission by The Art Collection Telekom for I Am the Mouth at MSU – Museum of Contemporary Art Zagreb.

Monuments depicts a hand, the artist’s own, in a series of interactions with a set of everyday materials and objects – from cotton balls, elastic bands and pieces of wood, to a brick, a work glove, a tape spool and a door stopper. Transformed in the act of holding, crumpling, “inhabiting” or gripping these banal materials, the hand in Horvat’s images is removed from its usual context and presented as both body and object, or as combination of the two.

Displayed ‘vertically’ – as raised fists, reaching fingers or open palms – the severed hands with objects become hybrid structures whose purpose and scale is playfully uncertain. The hands here are in one sense miniatures, shown smaller than human scale, and in another sense, gigantic, manifested – as indicated by the title – as a set of propositions for imaginary or speculative monuments.

Shot by the artist with her one hand taking a picture of the other, Monuments arises from a kind of a mini contortionist act in which the body attempts to see itself. For each image, the performing hand is stretched and pushed away from the rest of the body, so that the other hand can gain enough distance to capture the image.

Whereas most images in the series sketch monuments through the mundane interaction of a hand with commonplace “stuff”, a few images eschew objects or materials altogether to offer the bare hand as something monumental. Imagining the human body part as monument (or as part-monument), Horvat draws out a tension between the body’s emphemerality and the more durable materiality of monuments proper; structures built for posterity and intended to outlast us. Invoking their more fragile temporality, Horvat’s monuments suggest a kind of monumentalising of the fleeting, the temporary and the everyday. Focusing on mundane interaction, these makeshift structures can be seen as memorialising the body’s temporary experience of the material world.

In a series of encounters with different materials, the hand is transformed from an isolated body part into something ‘other than the body’: appearing at times as trees, or buildings; as structures both organic and human-made. Approaching ‘a part’ as if it were ‘the whole’, the hand in these images becomes a ‘creature’ – a thing at once grotesque and comical.

Via a kind of a pictorial demonstration of the hand’s gestural vocabulary, Monuments images indirectly flag certain iconic hand gestures that engender states or conditions often represented in monuments proper: those of protest, freedom, pride and defiance. In the mix here, however, are also the more throw-away, banal and affect-less gestures, as well as gestures that invoke “unheroic” acts or states: turmoil, frustration, hesitation, surrender.

In that sense, the series can be seen as charting a range of tests for the hand, demonstrating the hand’s (as a stand-in for the body) capacity to morph, to adapt to different material conditions – as well as manipulating those to fit its desires and purposes – and it does so sometimes with determination and sometimes with resignation, but in any case persevering, re-emerging time and again resilient, and seemingly always up for more.