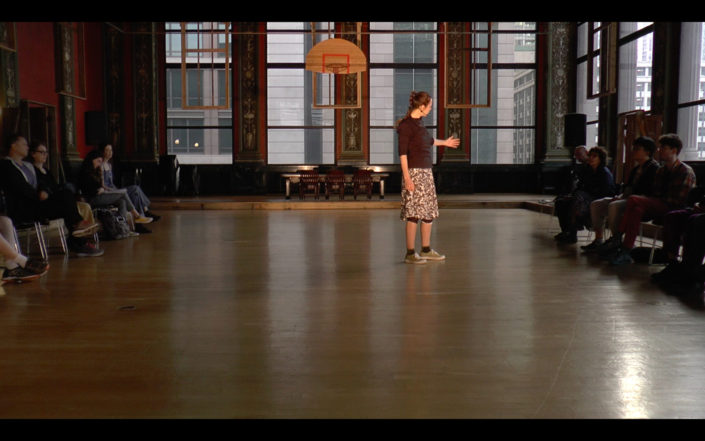 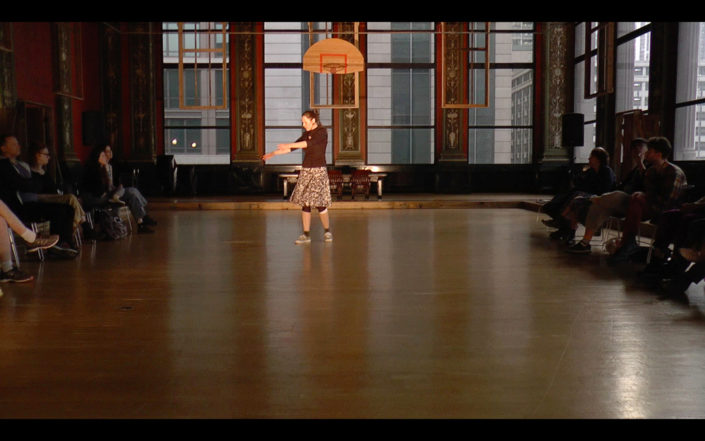 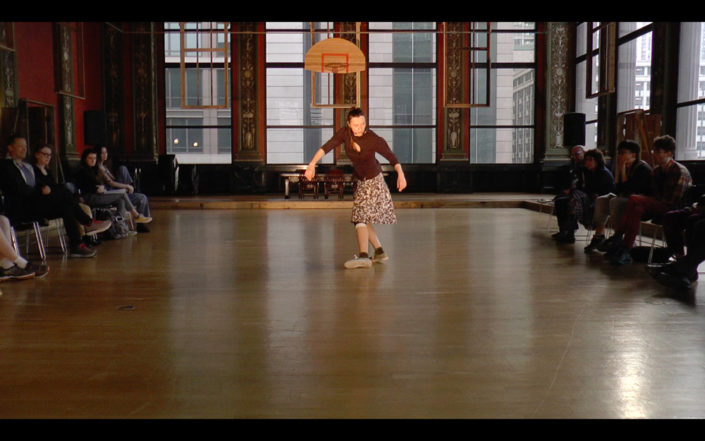 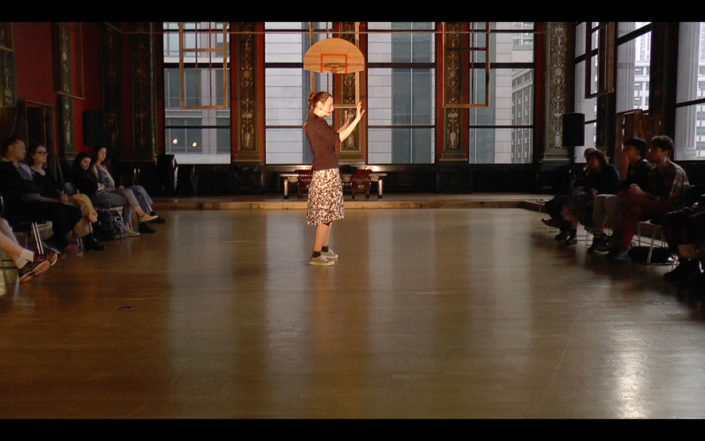 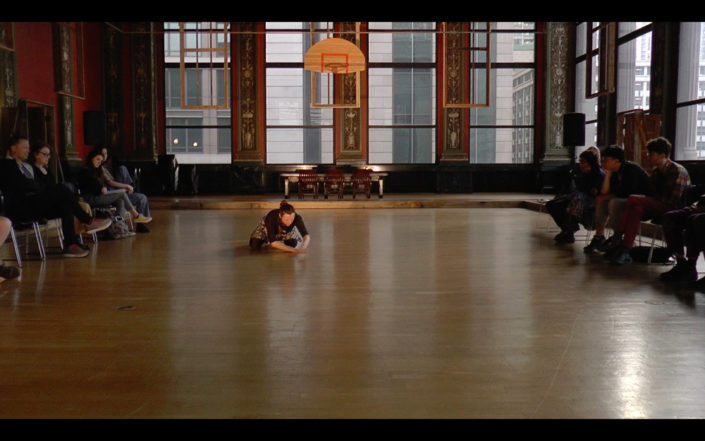 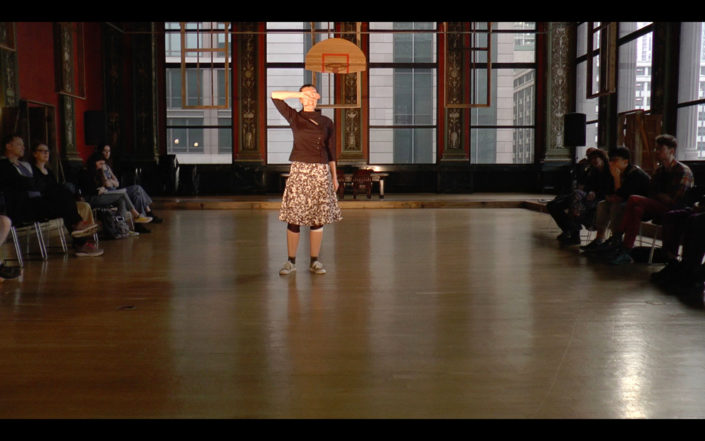 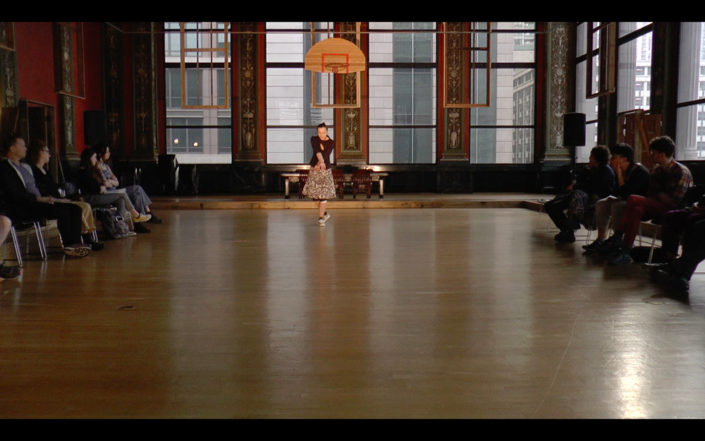 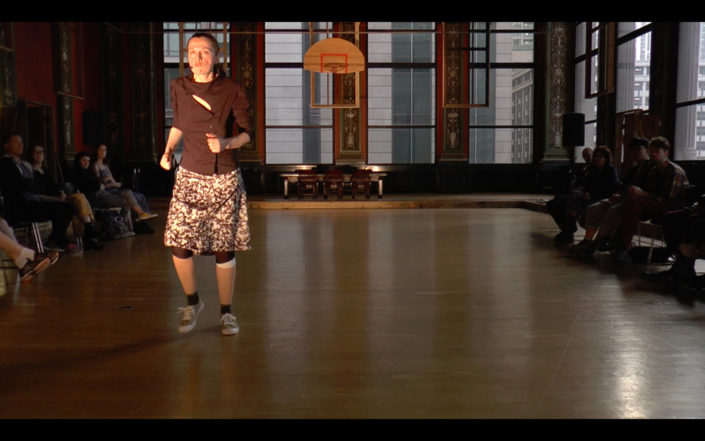 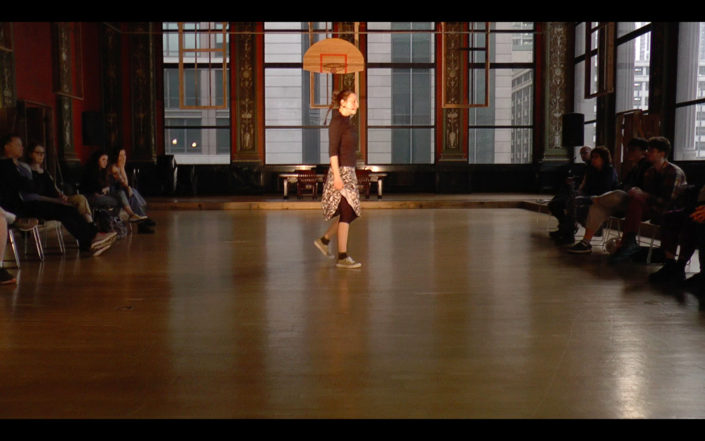 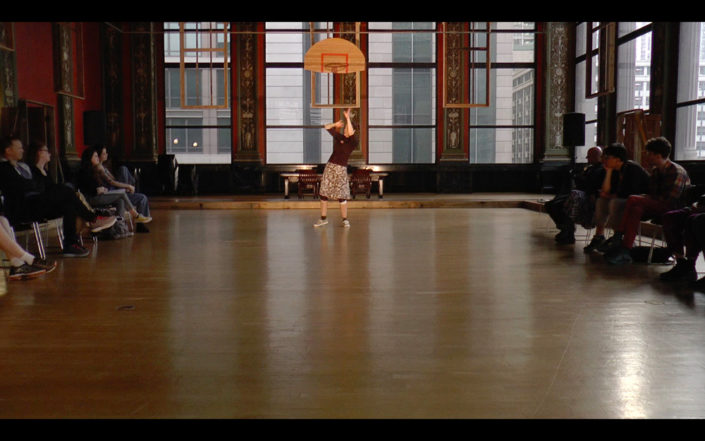 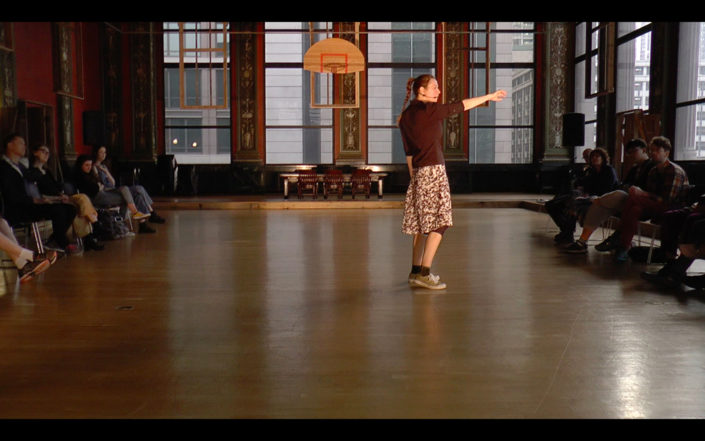 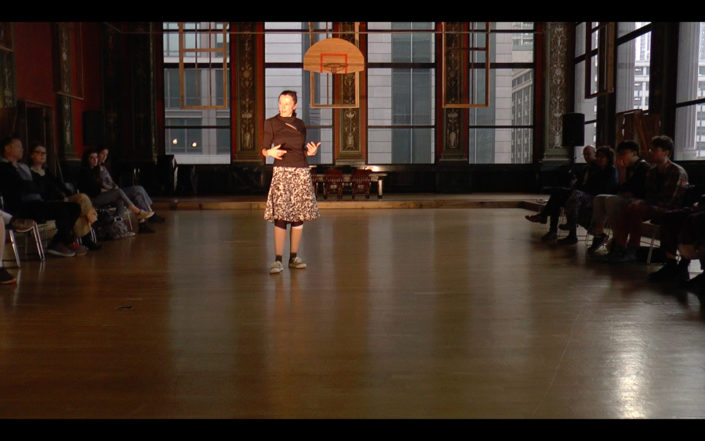 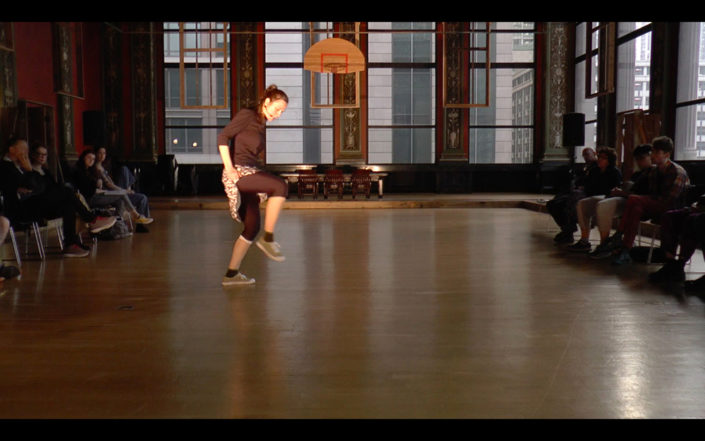 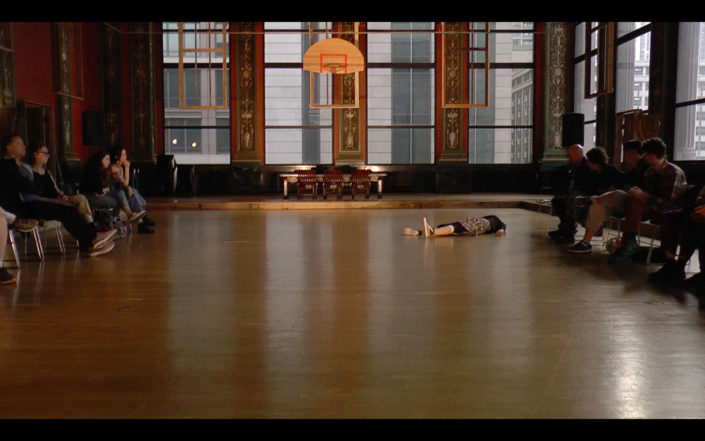 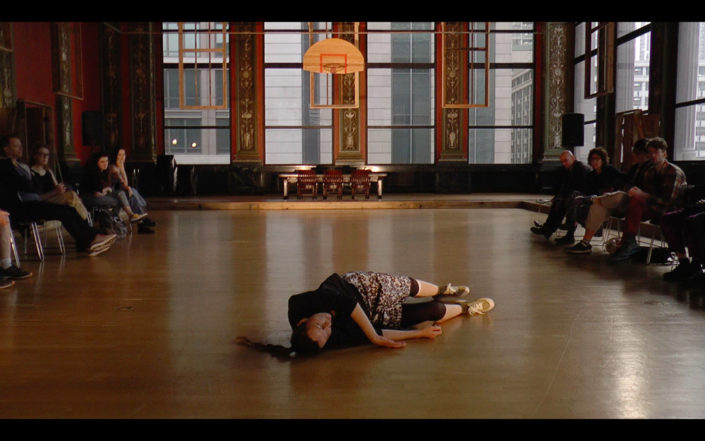 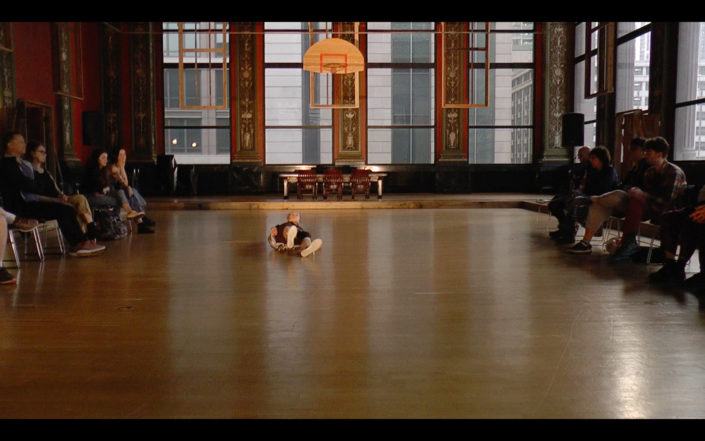 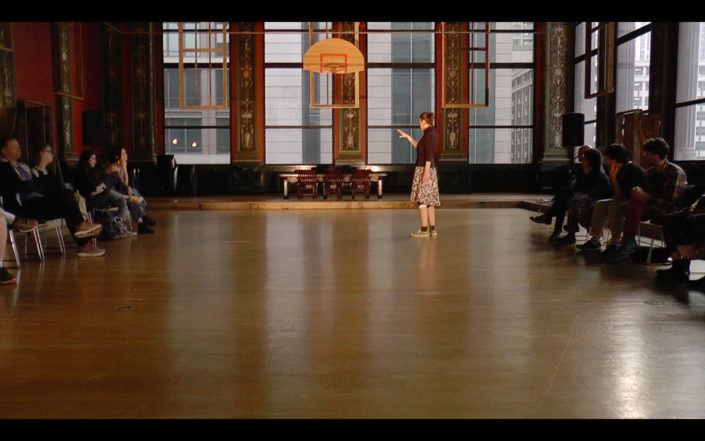 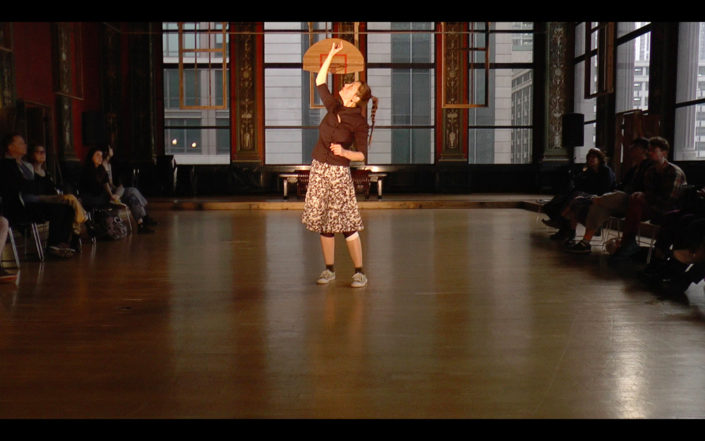 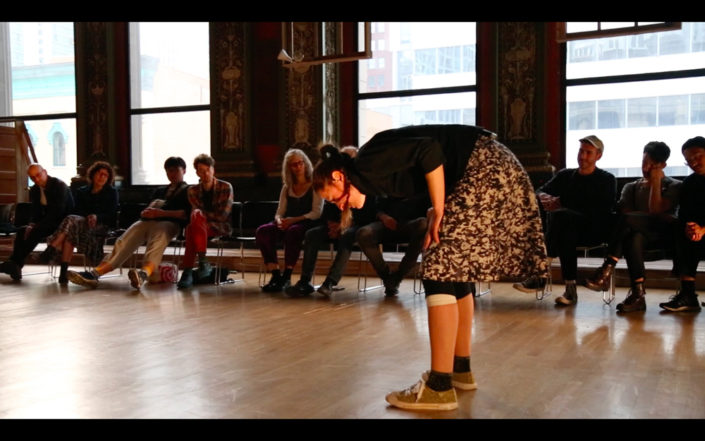 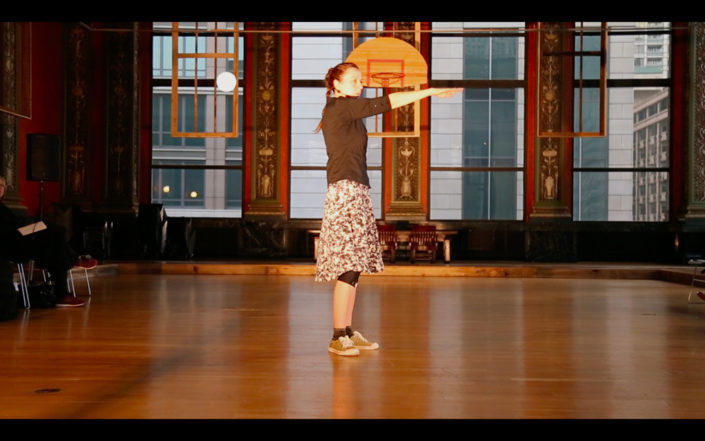 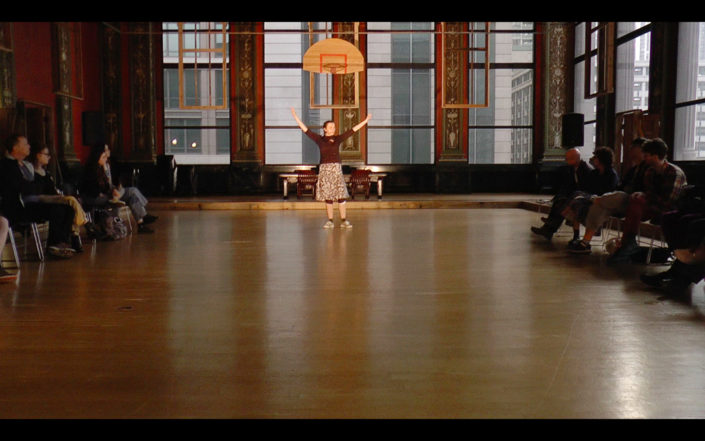 In Vlatka Horvat’s Third Hand, a lone performer in an empty space undertakes an epic task of describing and enacting actions and movements of a large number of people. Summoning scenes drawn from life and from performance – people running, standing, dancing, reaching, touching, fighting, falling, shouting, jumping, singing; as well as the more micro scale movements of the body – hands twitching, heads turning, feet tapping, legs shaking – Horvat fills the space with vivid fragments, images, and actions. The piece stages a kind of a collision of scenes brought together from disparate sources, and made to occupy the same blueprint of space. People are dancing waltz, polka, hip-hop, playing the drum kit, singing in a choir, and marching to the sound of a marching band – all in the same space. People dressed as soldiers and police officers and astronauts inhabit the space alongside naked people and people dressed as wizards and animals. The performance space is at once empty, and too full – filled with activity and images, which the performer sometimes “makes happen” in language only, and other times attempts to embody or enact.

Beginning from a cacophonous collection of performance moments that other artists and writers have recounted to her from memory, Horvat’s piece draws on cabaret and art performance, musical theatre shows, avant-garde classics and kindergarden spectacles. Interweaving an unruly catalogue of fragments remembered by other people with scenes and images that she herself has recalled from different places, Horvat creates a compelling performance that is something between a collage, animated archive, and kaleidoscopic memory palace.

Third Hand is interested in remembering and recalling, in acts of looking and their relation to narrative, and in the question of how we turn lived experience into a story. At the heart of the piece is the body, its resilience and fragility, its relation to space and context. The body summoned in Third Hand is a problematic, transforming, and misremembered one – mistaken for animal, ghost, object, or machine; hesitant and determined, exhausted and persisting, ecstatic, working, resting, and playing as it is made and remade in language and in the moment of performance. Using an economy of means and focusing on the sculptural potential of empty space, Third Hand speaks to the possibility of imaginatively filling the space with things that “aren’t there.” The third hand evoked in the title suggests a non-normative, ‘enhanced’ body, whose implied extra body part might presumably help the lone performer conjure the presence of other bodies and absent objects. The title also points to the multiple layers of removal and distance between – on the one side, things as seen or experienced, and on the other, their representation in language and narrative. Experience of the world rendered not first hand and not even second hand, but third hand – displaced even further, and hence subject to the processes of distortion, fragmentation, and erasure.

In early 2019, as part of its Year of Theater, The City of Chicago Department of Cultural Affairs, organised an exhibition focused around the archive of goat island, a Chicago-based performance company, which has – over the course of its 23-year lifespan (1986 – 2009) and after – influenced generations of artists and performance makers, both in Chicago and internationally. Titled …we have discovered the performance by making it, the exhibition presented materials from the company’s archive alongside nine new commissioned works. As one of the invited artists, I was asked to make a work that started with an encounter with the goat island piece It’s an Earthquake in my Heart, which I saw when it was first presented in Chicago in 1999. At the heart of Earthquake was the construction of memory – investigated through enactments of an unnamed disaster and through the repetitive re-playing of its aftermath. Accepting the invitation to make a work in response to it, I have decided not to watch the video documentation of the 1999 performance, but to make a work by summoning fragments, images, and moments of multiple performances and events that linger in the bodies and memories of other people. Deferring the act of remembering to others in this way, my response to Earthquake was to echo this absent object by placing its fragments in dialogue with those taken from other absent objects.

The contributors to the project, who have written their recounted memories in response to a series of prompts I have given them, are all performance and dance makers, theorists and writers on and around performance:

Commissioned by the City of Chicago Department of Cultural Affairs and Special Events (DCASE) as part of the exhibition goat island archive – we have discovered the performance by making it.

Research and development supported by a residency at the Graham Foundation for Advanced Studies in the Fine Arts, Chicago.

4 April 2019 – Work-in-progress at the Graham Foundation for Advanced Studies in the Fine Arts, Chicago, part of IN>TIME performance festival. The work-in progress was developed and performed with Michael Thomas, a co-founder of the Chicago-based collaborative group Lucky Pierre.