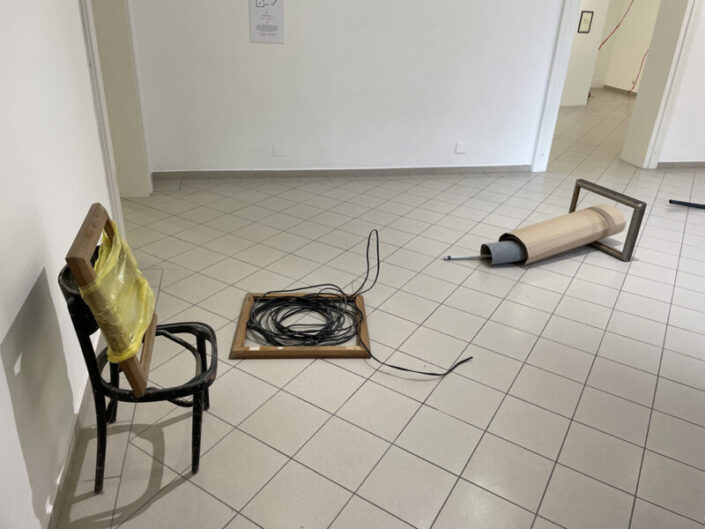 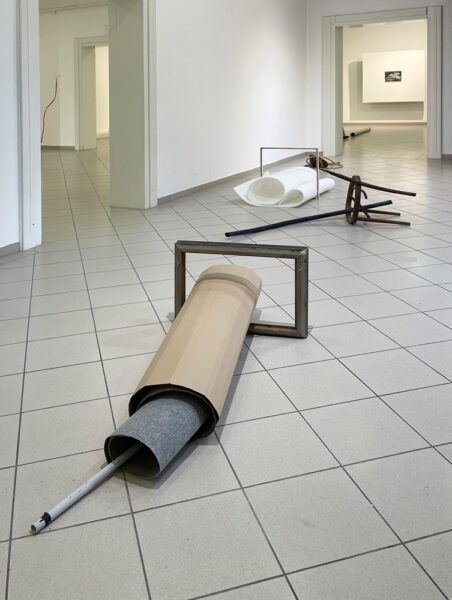 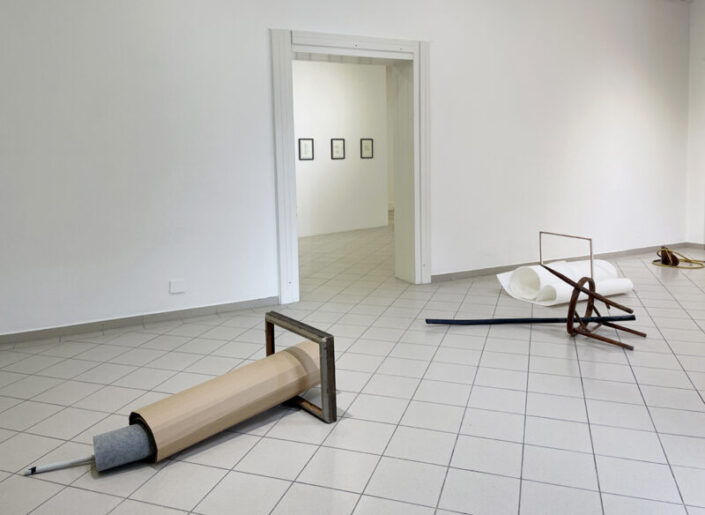 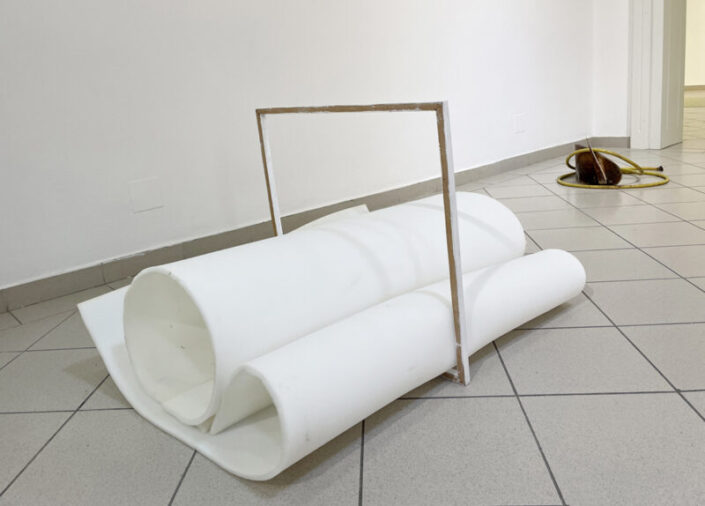 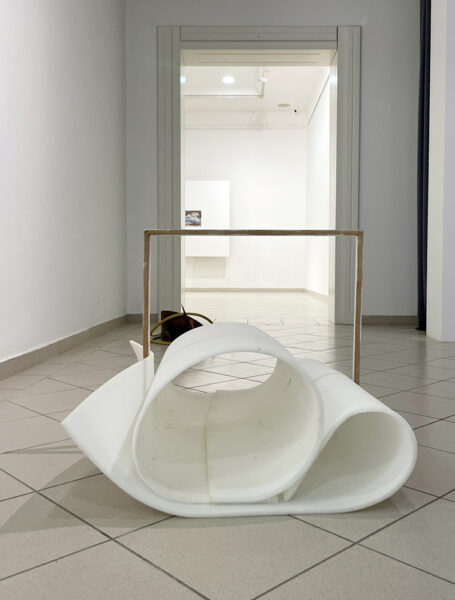 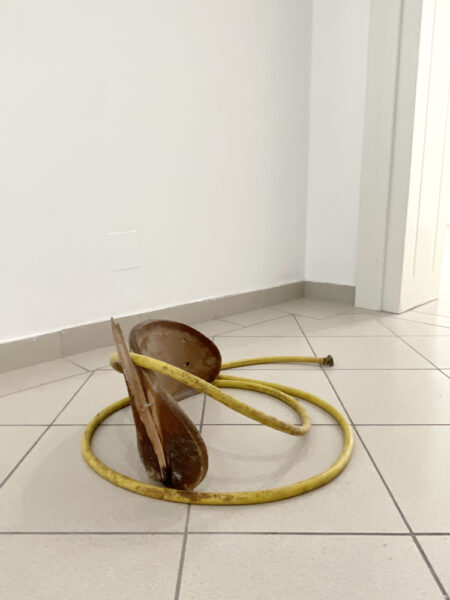 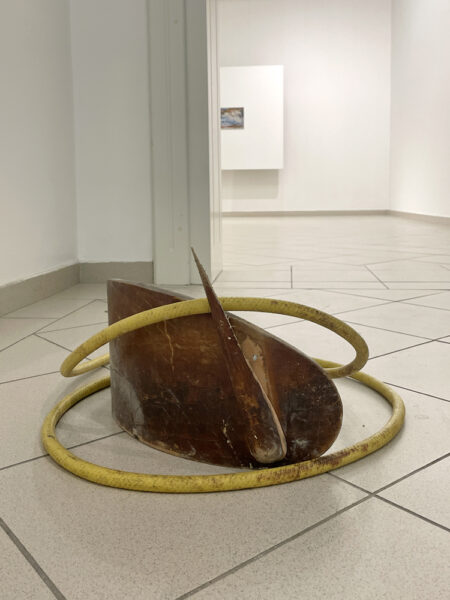 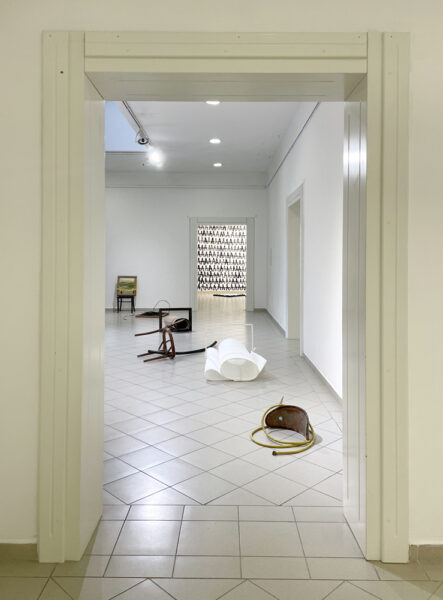 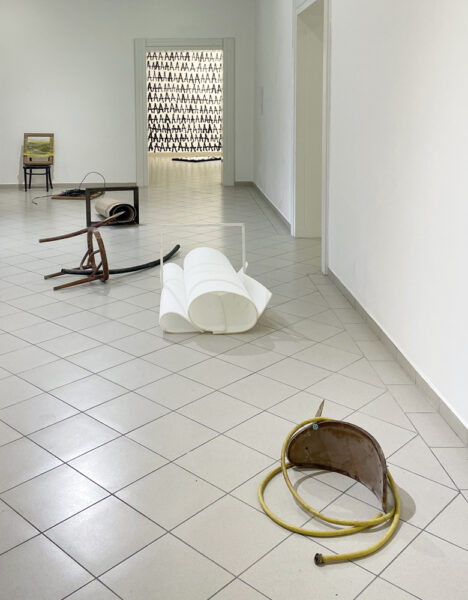 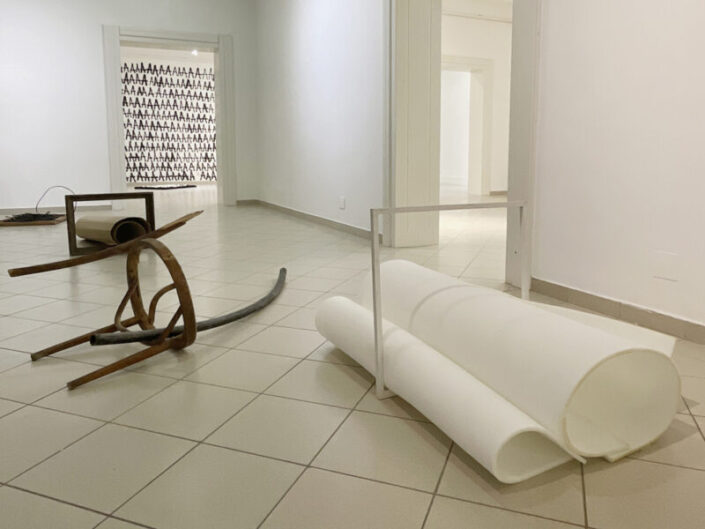 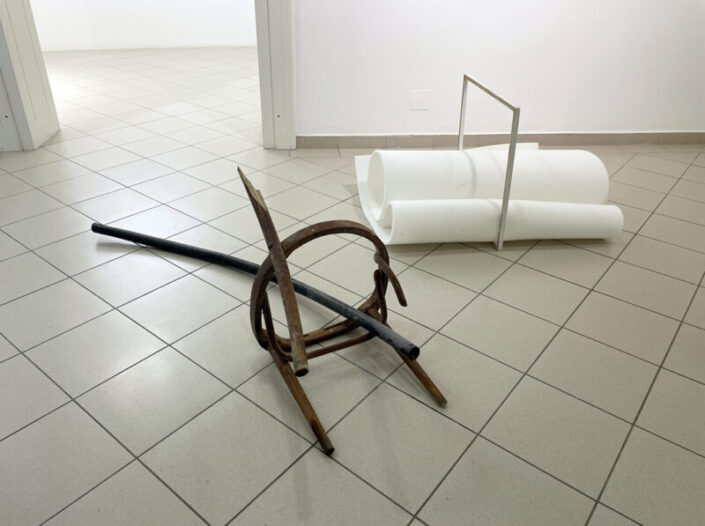 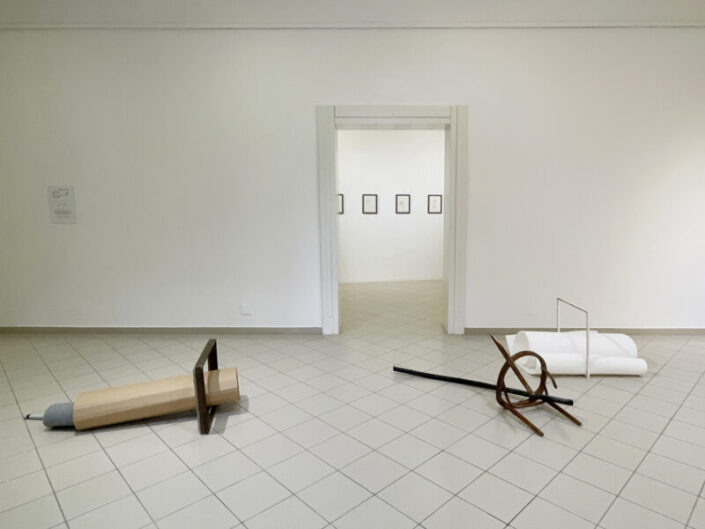 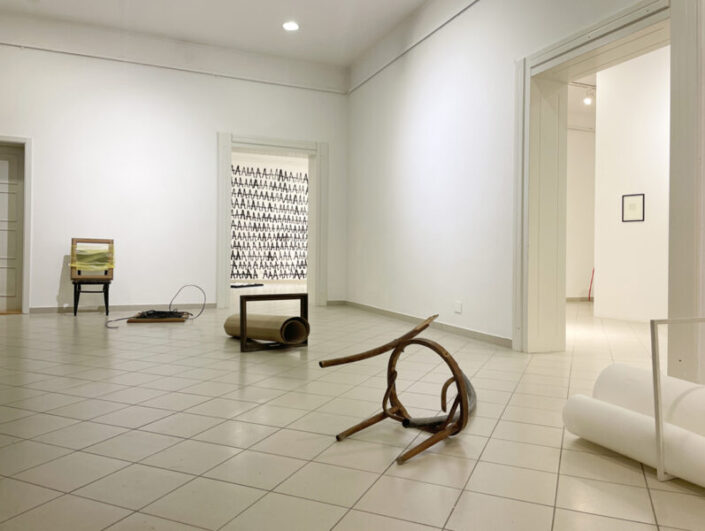 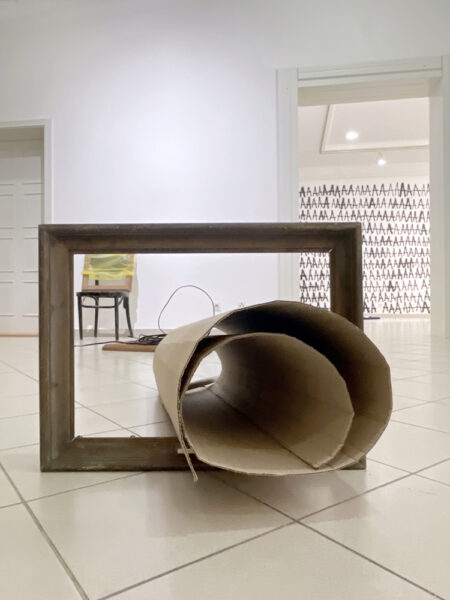 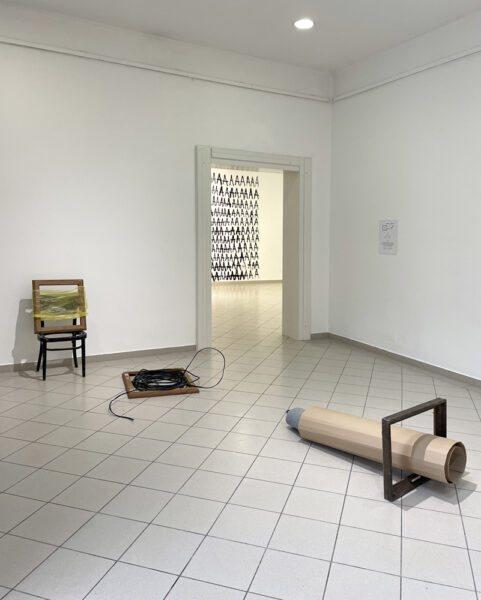 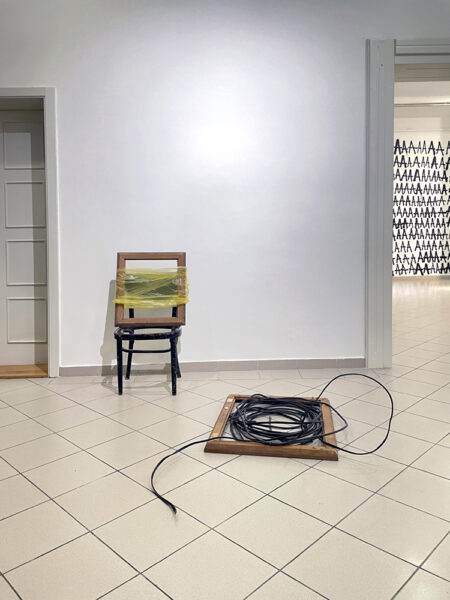 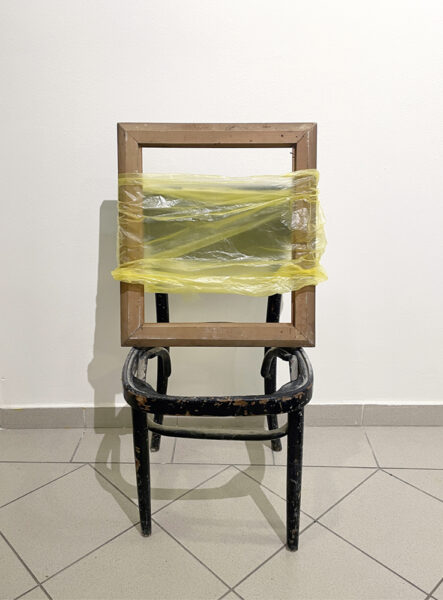 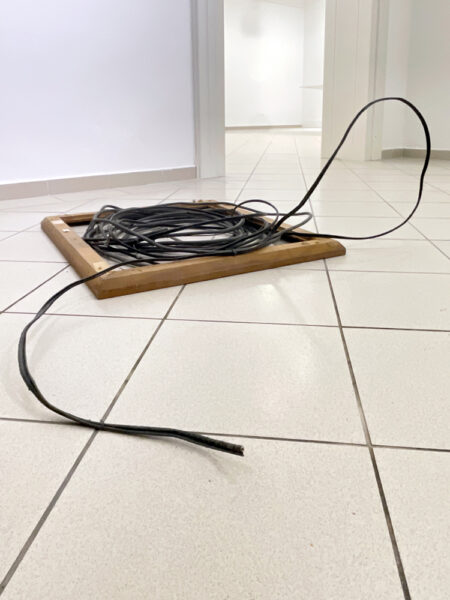 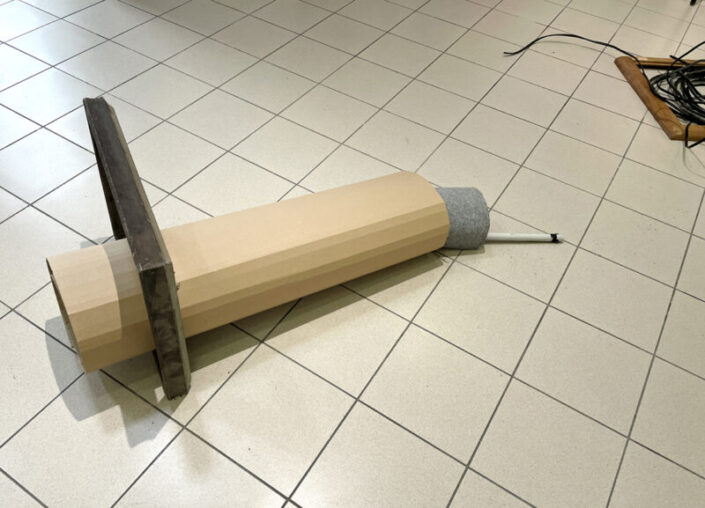 Through and Through, 2022
Assorted objects and materials

Responding to the entrance space of the Nadežda Petrović Art Gallery, Vlatka Horvat’s new site-specific work Through and Through repeats and amplifies elements of the building’s architecture to create an installation centering the experience of the visitor as they negotiate and move through a transformed environment. In its playful reiteration of spatial forms that echo the numerous doors and openings already present in the space, Horvat’s work creates a dysfunctional repertoire of additional portals and entrances – though largely unusable as such – amplifying the space of the entry hall as a zone that is neither here nor there, neither outside nor properly inside, in which the transitory actions of entering, exiting, and passing through are brought to the fore and playfully messed with. In Horvat’s installation, the ubiquitous elements of built space – namely doors, doorframes, and other architectural openings – are explored as both material structures with function (supporting, allowing access, framing view from the inside outward and from the outside in) and as metaphorical propositions in the sense that they frame and limit intellectual viewpoint and ideas.

Horvat’s sculptural installations frequently transform spaces by reworking or re-organizing them, or by intervening in them with temporary gestures and materials. Working with ‘what is already there’ is part of Horvat’s methodology, which relies on an economy of means and a certain pull towards what the artist calls ‘unnecessary gesture’ – a redundant and excessive act of repeating, doubling, or mirroring some aspect of the environment so as to both highlight and reimagine the spatial and social relations operating in it.