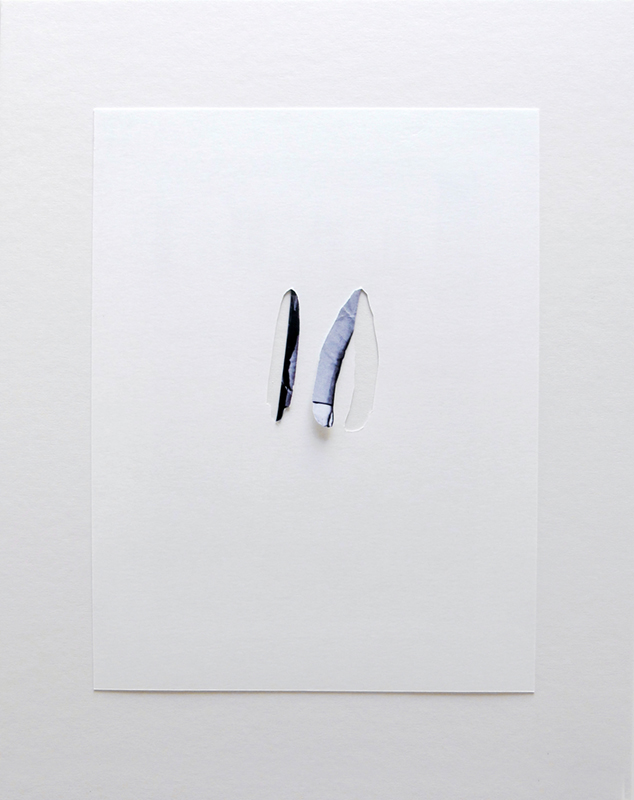 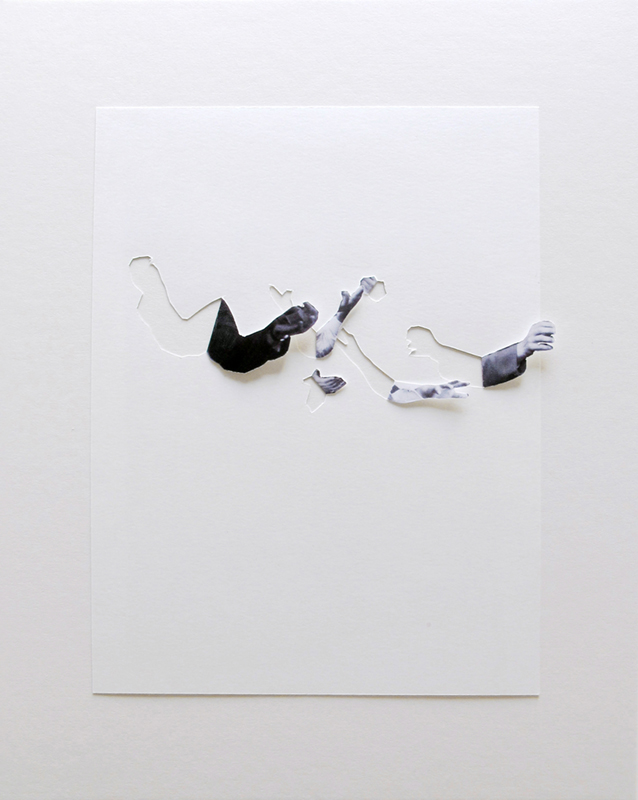 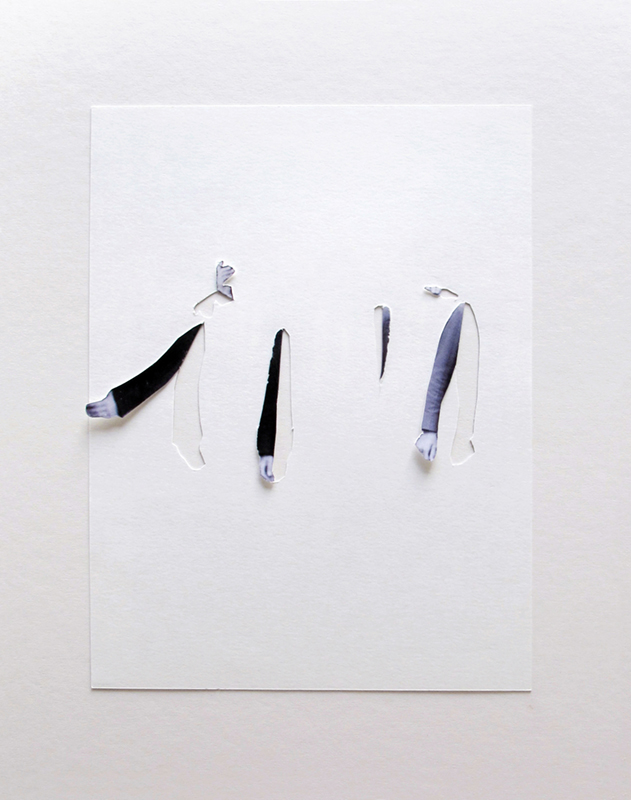 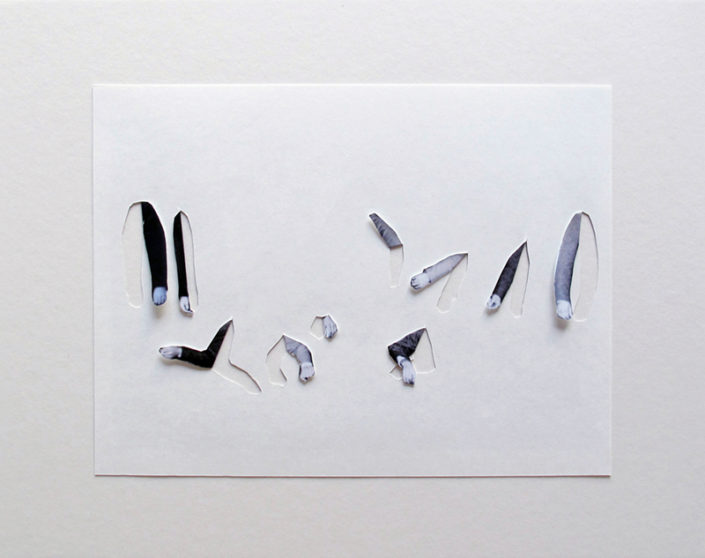 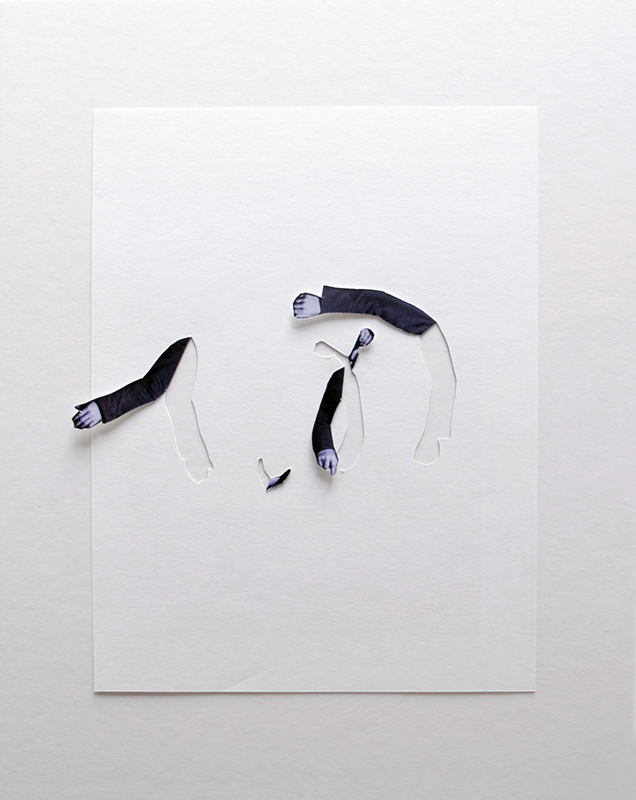 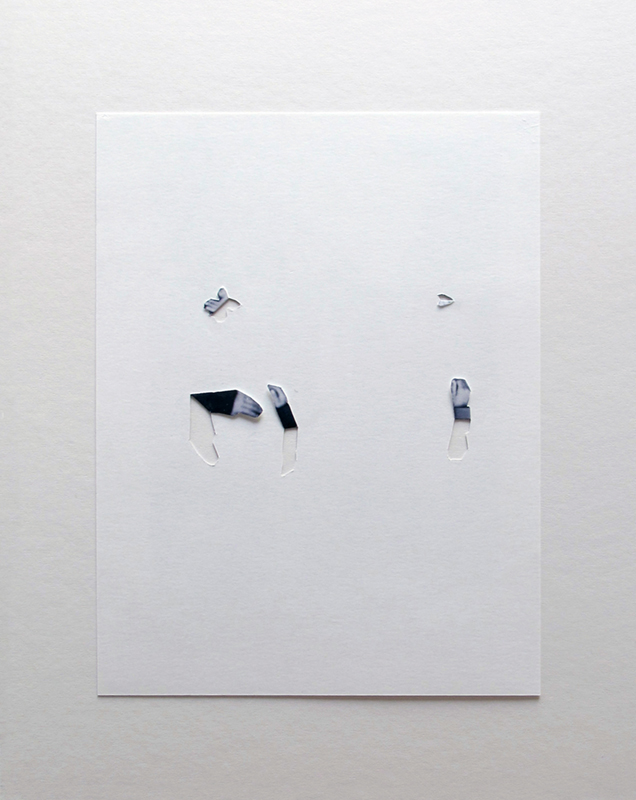 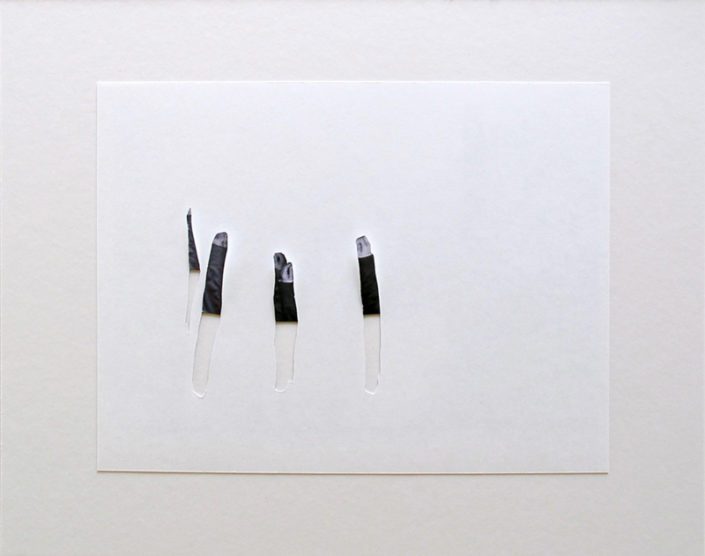 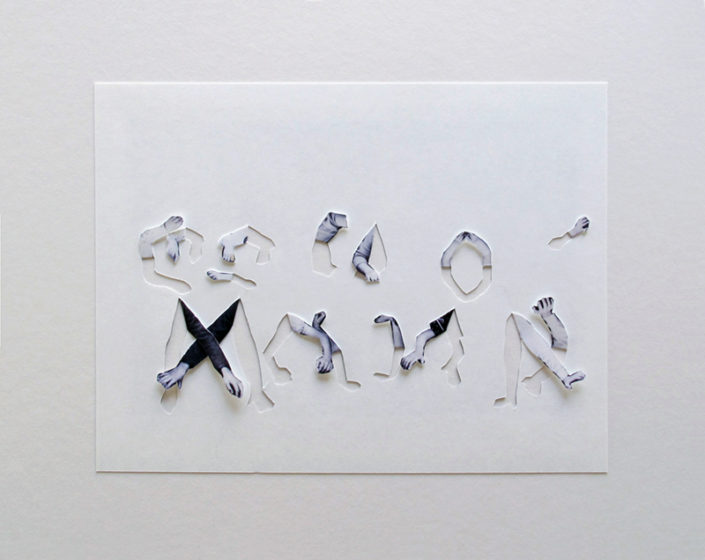 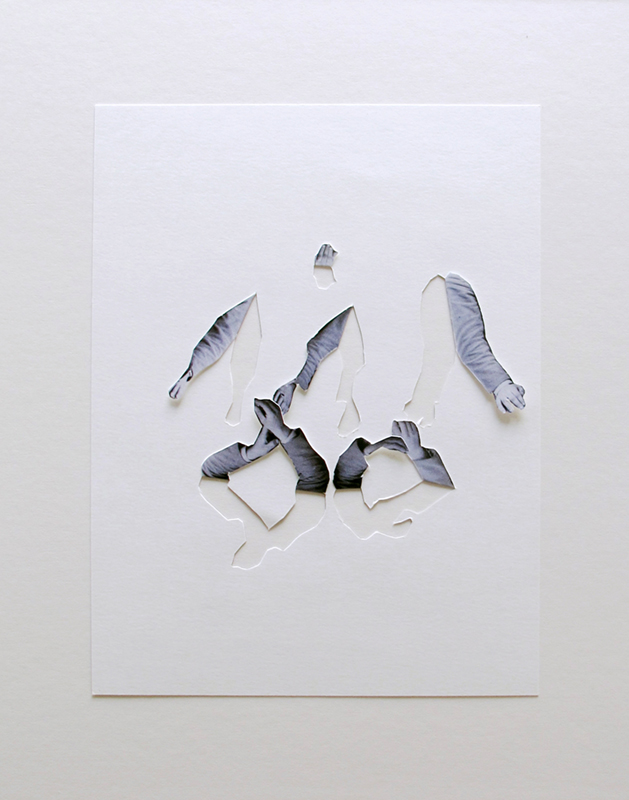 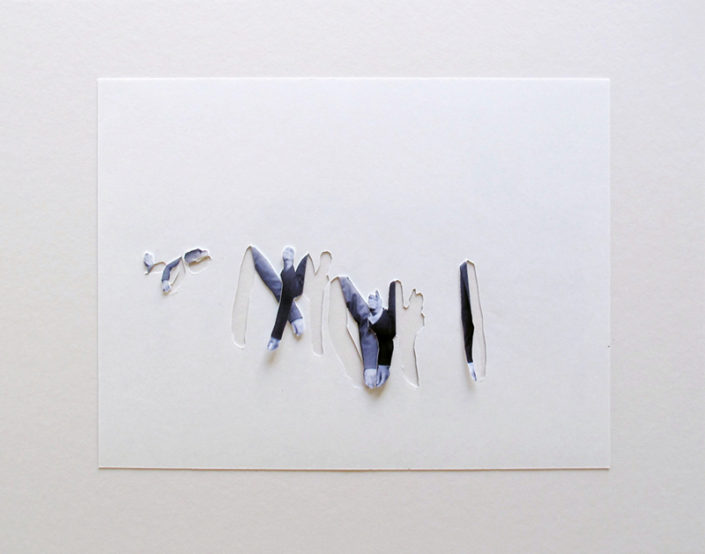 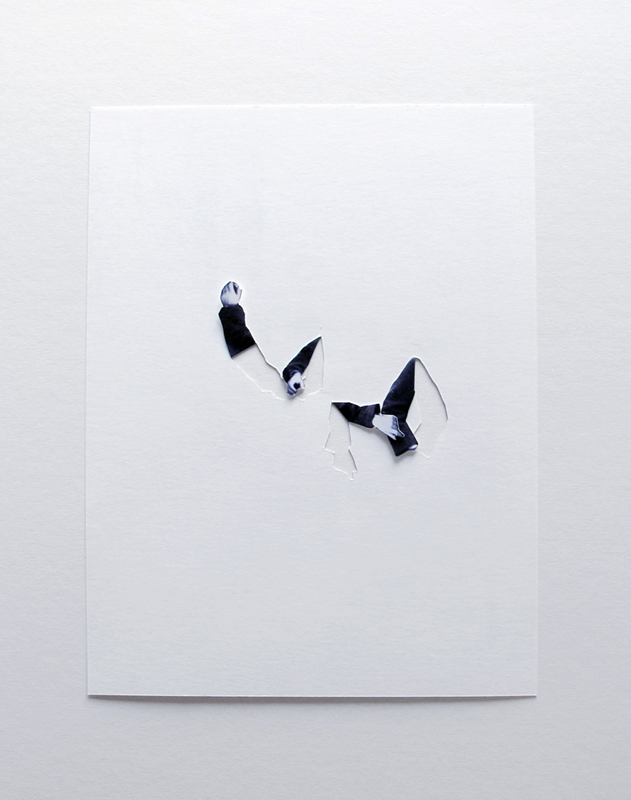 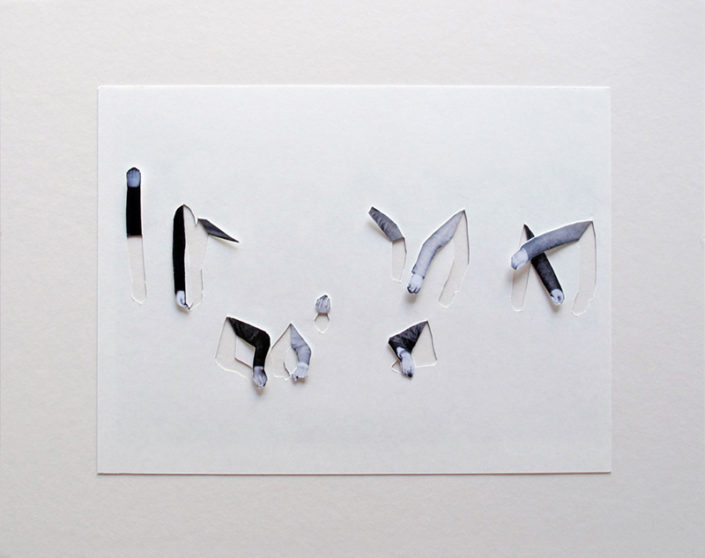 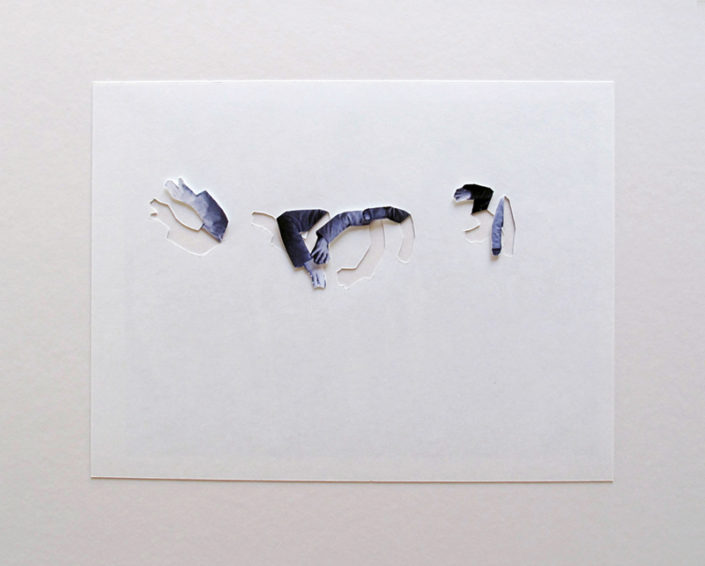 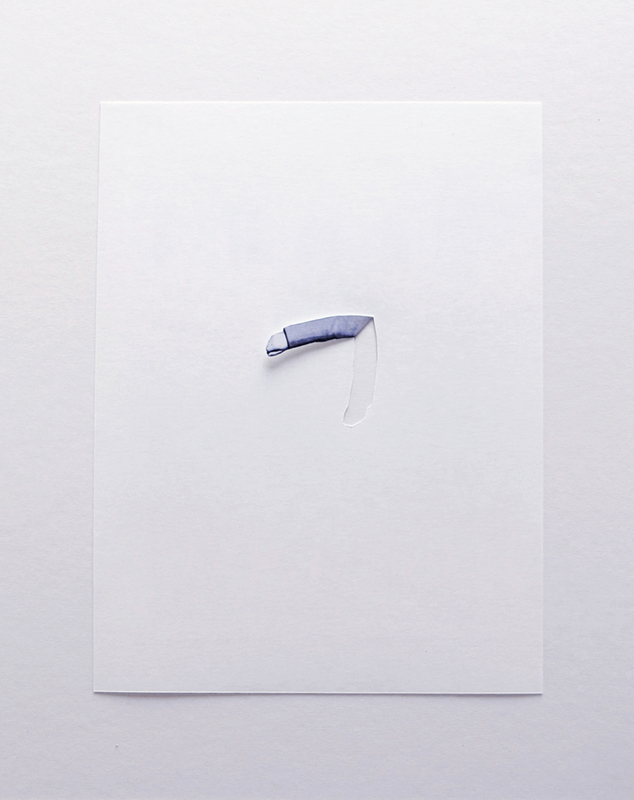 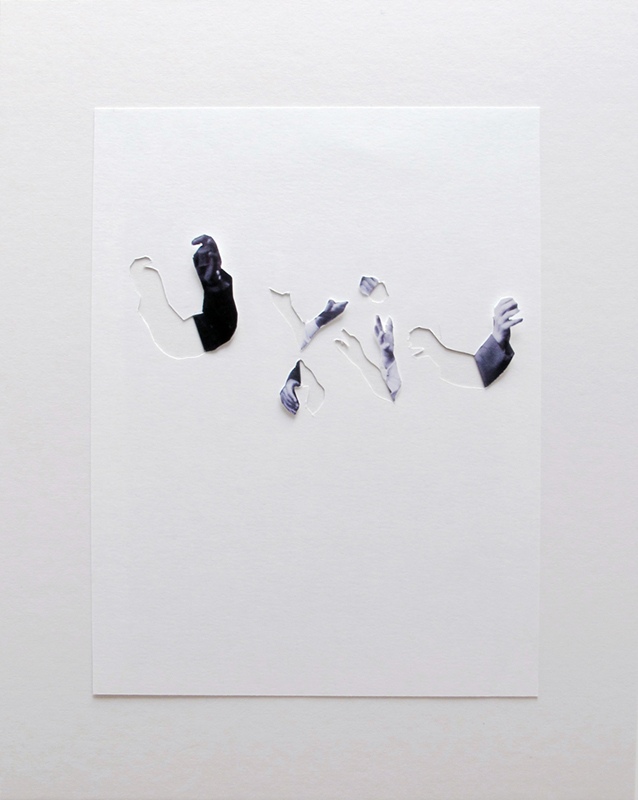 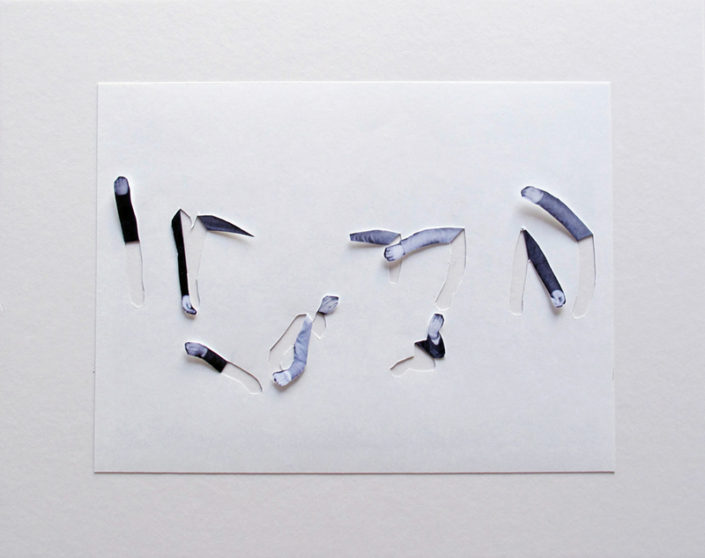 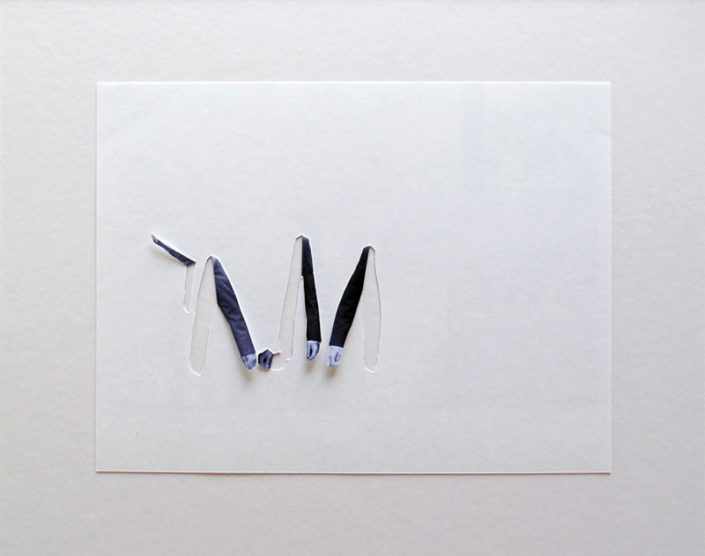 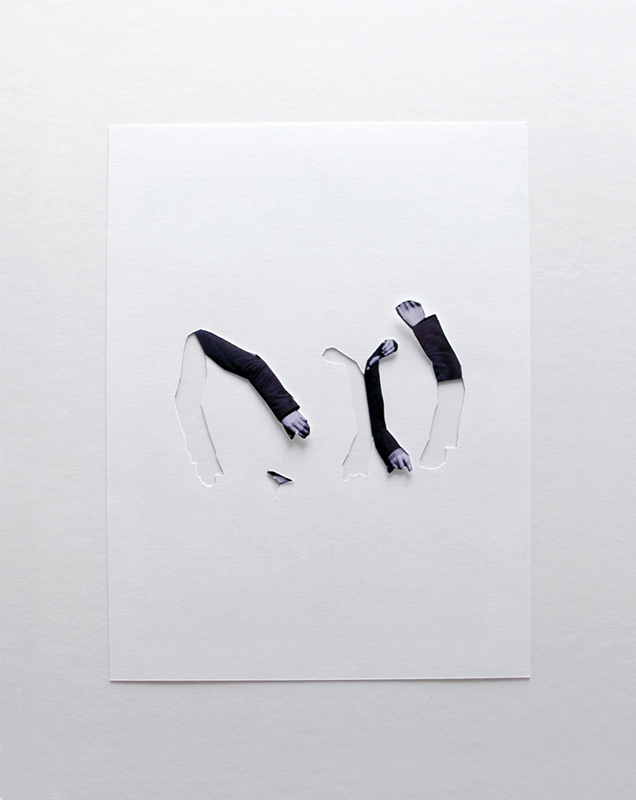 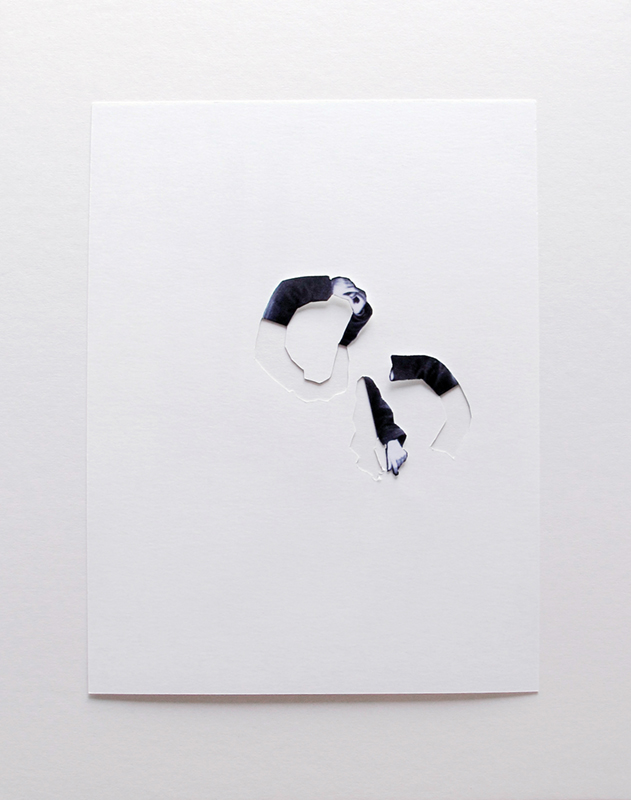 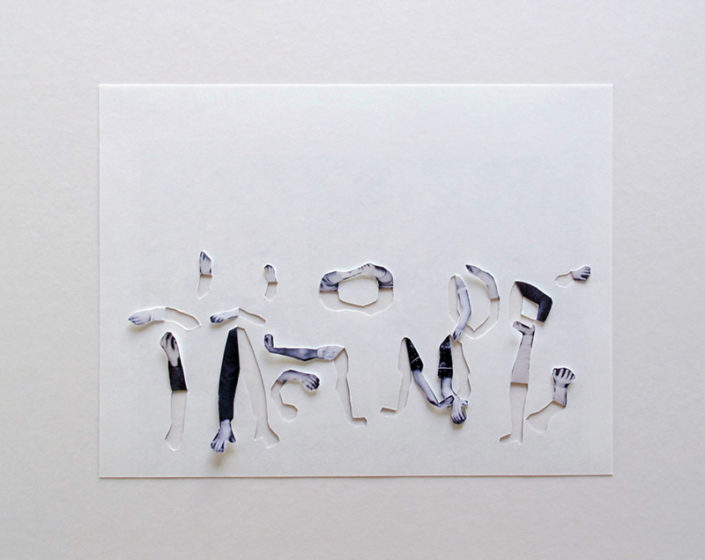 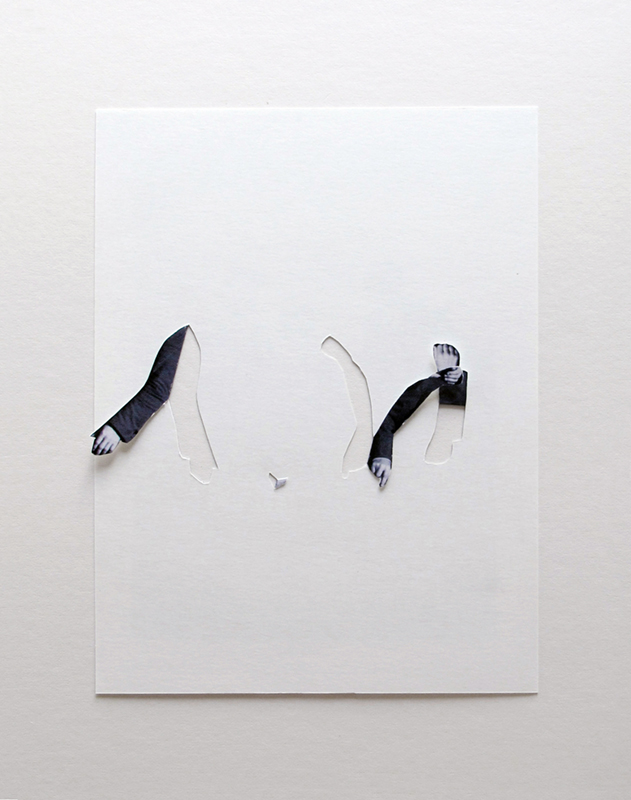 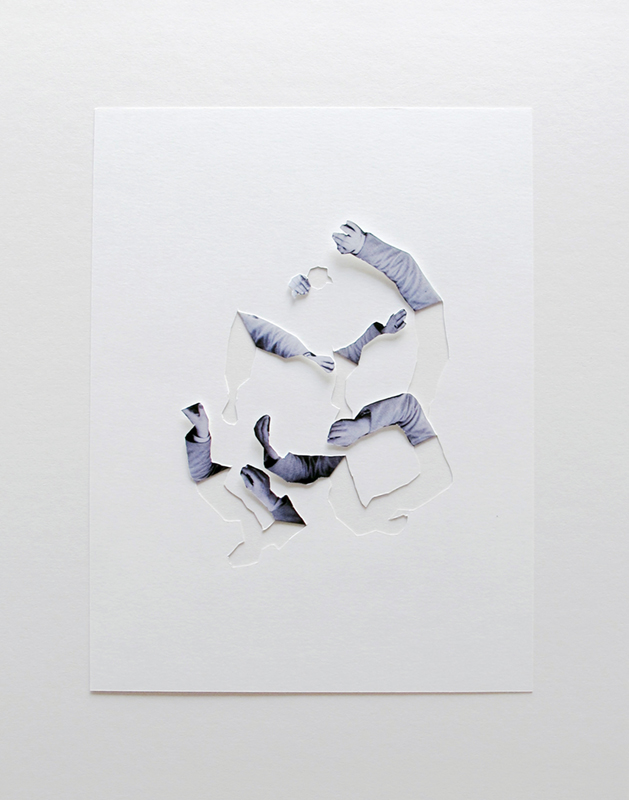 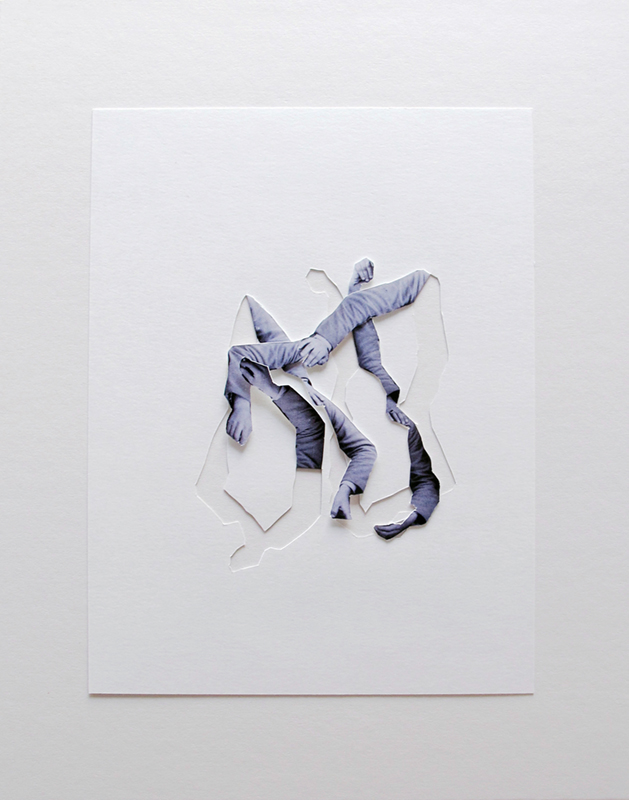 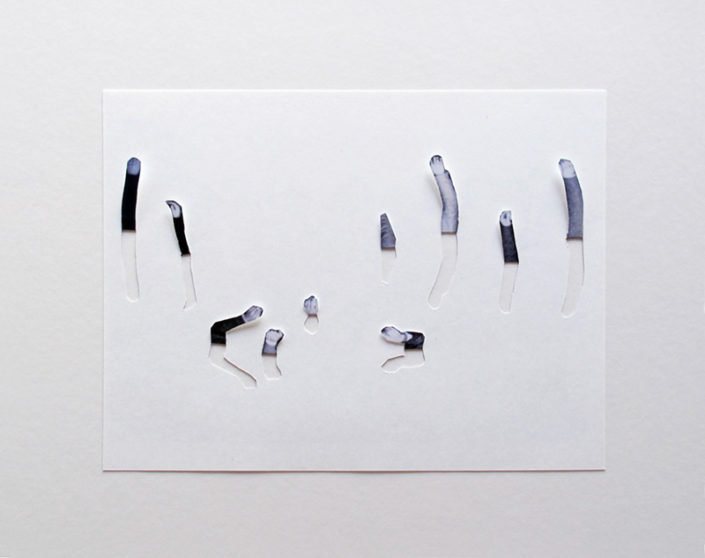 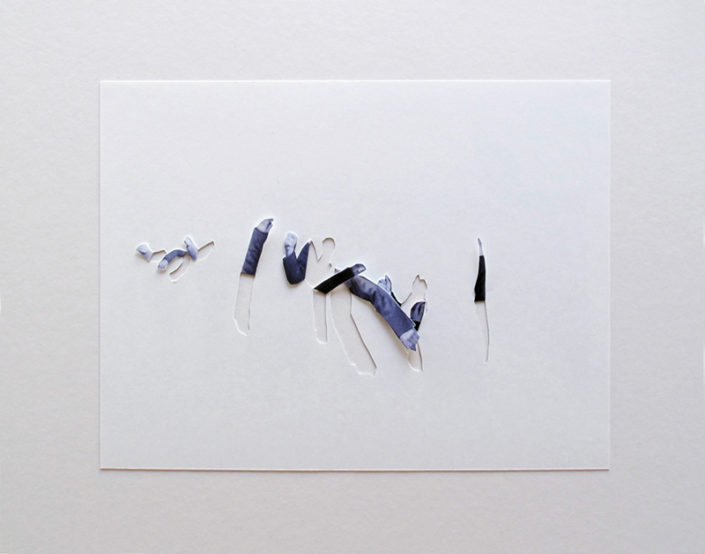 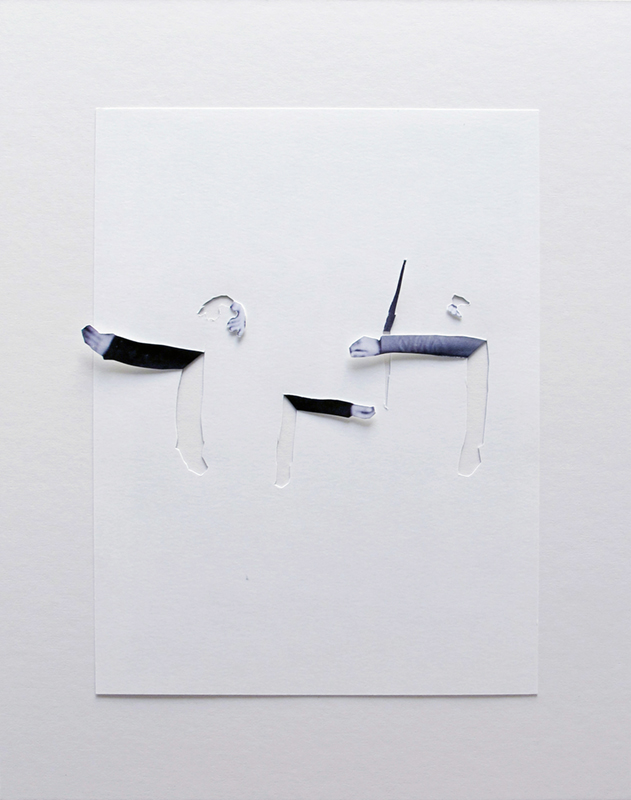 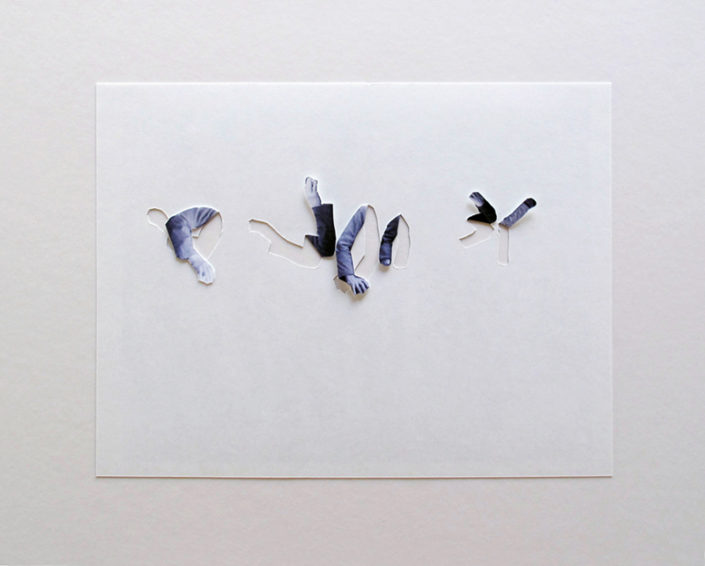 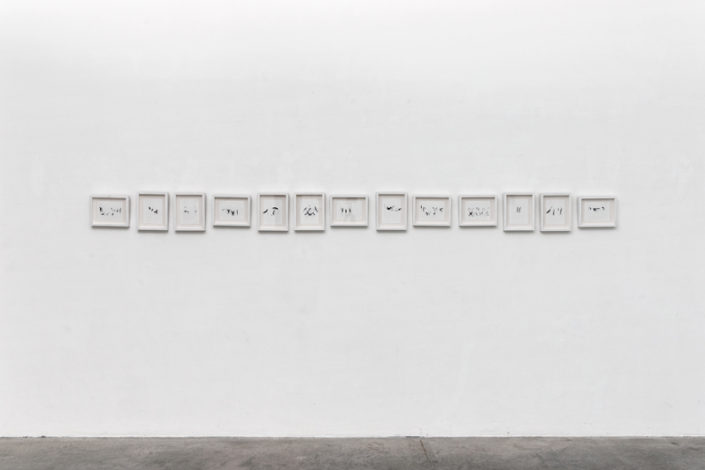 This series of collage works uses as source material found historical photographs of my parents’ youth in 1970s Yugoslavia – a time of optimism, idealism, and faith in the future. As a gesture of revisiting the artifacts of the past and reconstituting them, I have re-photographed the original photographs, then turned them to their verso side and repeatedly cut out and folded back all hands and arms of the figures featured in the images. I’m using the same photograph several times, but cutting/folding it differently so that different versions and multiple possibilities are created out of each source image.

Sometimes it seems as though the folded hands are flapping backwards in a state of being lost or confounded; other times they appear to be reaching, or being thrust back: Disembodied, without the rest of the figure to whom they belong, they seem out of place. The viewer has to engage in a mental game of “completing the scene” or constructing the image on the other side out of fragments of discombobulated hands. The act of turning the photographs over to their back side, and repeatedly offering only glimpses of figures, creates in these works a sense that something more is depicted on the other side – but this something is out of reach, not available to us, uncertain, open to speculation. In that sense, Up in Arms speaks to the ways that the past is always – at least to a degree – something imagined, re-imagined, remade, thru the prism of memory and through our experience of its traces visible in the present moment.

The scattered hands and arms perceptually “detached” from the rest of the bodies become clues, or indexes of something located ‘elsewhere’ (on the other side, in another plane, in another time), but are abstracted here to the point of appearing as visual code or a kind of a score. What additionally interests me here in a formal sense is how the 2-dimensional piece of paper, in the act of being cut and folded back, appears to “defy” its 2-dimensionality, reaching towards objecthood as the hands that have been folded back fail to stay flat against the surface of paper.