Kunsthalle Wien is doing weekly podcasts with artists whose work is in the exhibition “… of bread, wine, cars, security and peace,” which had to close a couple of days after it had opened… The good news is that the museum (and the show) will reopen on 29 May and stay up until October.

Here is yesterday’s podcast with me talking about my new sculptural works I made for the show:

The recording is from a walk-through we did in the museum on 7 March, just before the lockdown started in Vienna. Kunsthalle Wien space is massive and there were lots of people in attendance, which is why I’m projecting too too much for a podcast!

The documentation of the pieces I’m talking about can be seen here.

And here is a video version of the same interview:

Head over to @KunsthalleWien Instagram every day this week (6-12 April 2020) for a guest post by me; and in subsequent weeks for posts by other artists from the exhibition “…of bread, wine, cars, security and peace” which sadly had to close right after it opened.

I’ve added some pics of the new works I made for …of bread, wine, cars, security and peace at Kunsthalle Wien, which opened on 8th March 2020. You can see more images here.

Tonight at 6pm Tim Etchells and I are doing a talk at Millennium Gallery in Sheffield about our collaborative work No Contextual Information – a series of 35 photos which is now in the permanent collection of Museums Sheffield.
Part of Art Talks with Art Fund.

The brochure for Kunstfestspiele Herrenhausen festival arrived in the post yesterday, which makes it very real that this is happening!

Until the Last of Our Labours Is Done, my durational performance commissioned by the festival, will premiere on 22 May 2020, 6-10pm in the incredible 70m-long baroque gallery on the grounds of Hannover’s Herrenhausen royal gardens.

In Vlatka Horvat’s Until the Last of Our Labours Is Done, a group of six performers travel back and forth on a long narrow track, negotiating a landscape of detritus, wooden planks, sticks, fabric scraps, and various broken objects.

Part comical relay race, part surreal lo-fi physics experiment, and part obstacle course, the piece ebbs and flows through the four hours of its duration, the performers’ journeys at times aided, and at other times hindered by the objects and materials they carry with them.

Set to a live improvised musical score that augments and contradicts the rhythms of the performance itself, Until the Last of Our Labours Is Done is an unruly choreography of fabulous inventiveness, humour and play, with occasional glimpses of violence – a melee of objects and bodies dragging, pulling, sliding, and jumping.

The performers’ movement shifts between being energetic and competitive, and being reluctant or even resigned. They keep moving forward nonetheless, then return to their starting line again, determined to fight on and start over in a different way. Through the course of this game – with its rules warping, changing and disintegrating over time – both the performers’ moving bodies and the objects they work with are revealed in a new light. Indeed, as the performers continually reinvent both their journeys and their relation to the items they use, a sense of radical imagination is always at hand, through which everyday objects and materials are temporarily transformed into vehicles, props, crutches, vessels, shoes, attachments for the body and even additional body parts.

In its determined exploration of progress and stuckness, persistence and creativity, Until the Last of Our Labours Is Done speaks of human perseverance and resilience, of the need to start over, and of the drive people feel to keep going against all odds. Invoking the liberatory potential and the sheer exhaustion inherent in human movement, the work offers hints of historical dance marathons, echoes of the processes of migration and displacement, and a sense – underneath everything – of a human impulse to keep moving just to stay alive.

Conceived and directed by Vlatka Horvat

Here are the shows I’m currently in:


Both of the above shows are at:Vehbi Koç Foundation – Arter Collection
ARTER, Istanbul, Turkey 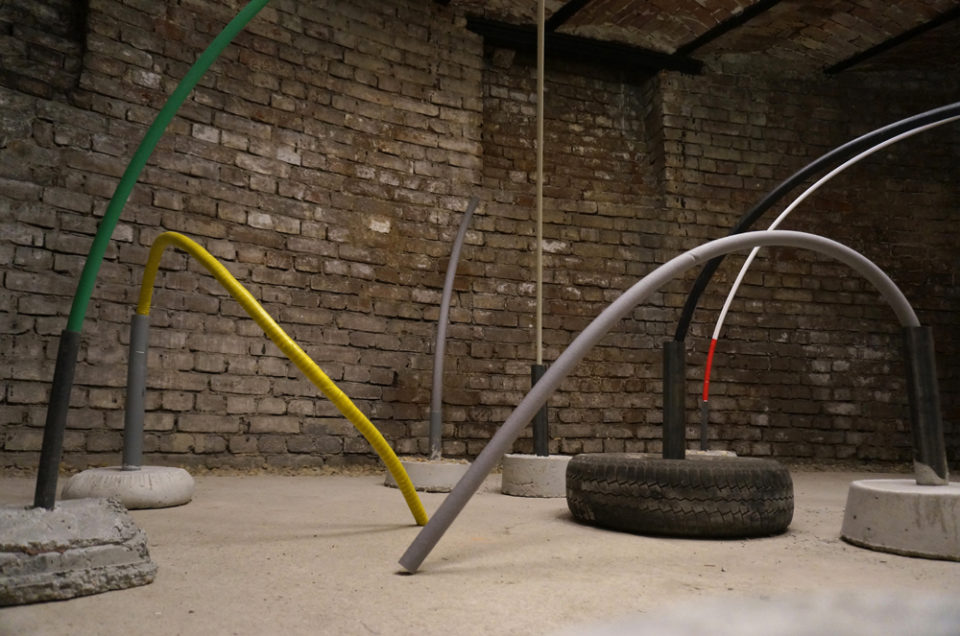 Supporting Objects, my recent solo show at Eastwards Prospectus in Bucharest, which was on view 15 December 2018 – 15 February 2019, is reviewed in the April 2019 print issue of Artforum. I’m grateful to Daria Ghiu for a thoughtful reading of my work.

The online version of the print issue requires a password – if you are a subscriber you can read the full review here: https://www.artforum.com/print/reviews/201904/vlatka-horvat-79096 Documentation of the show can be seen in the Projects section here.

I’m taking part in Strong Language, part of Off the Shelf festival in Sheffield. Curated by Tim Etchells, Strong Language takes place over three days – 12-14 October – and includes readings, performances, projections, installations, and discussions by and with a fantastic group of writers, artists, and publishers.

Last night at Site Gallery, I read a new short story of mine, alongside readings from Tim, M John Harrison, Courttia Newland and Tony White. Alongside the live events, my new work In Eyes and Hands – a series of text projections – is being projected large scale onto the side of Sheffield’s Graves Gallery on Tudor Square. The work is on 8-10pm.

In Eyes and Hands summons human experiences, conditions, and states of mind via a collection of commonplace idioms featuring objects, animals, and elements of nature placed inside, on top of, or around, various parts of the human body. Creating a picture of humanity that shifts between the comical, the grotesque, and the poetic, the text is a surprising and playful compendium that moves from ’time on your hands’ and ‘frog in your throat’ to ‘hat in your hand’ and ‘wool over your eyes.’ As the work unfolds, the phrases are remixed to create a nonsensical list of images which re-imagine the body and its relation to the physical world.

Here are some phone pics from last night: 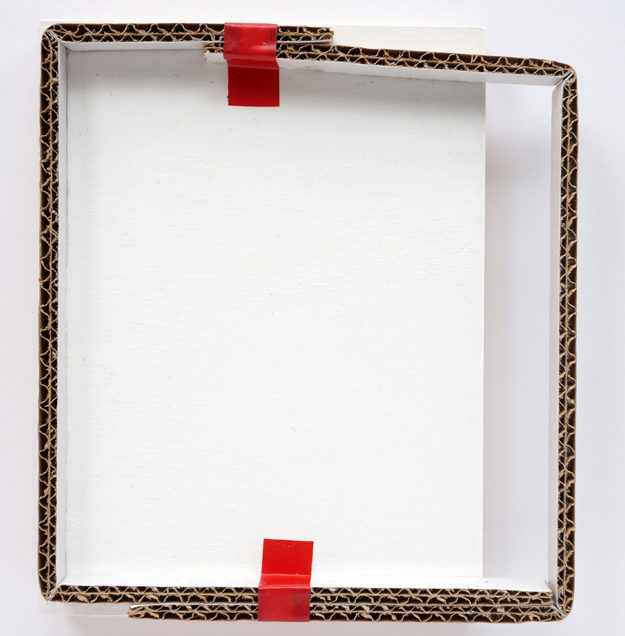 Very happy that my work at Sunday Art Fair got highlighted in artnet and in Financial Times – though I wouldn’t quite say that I got ‘stranded’ or ‘trapped’ in the US! 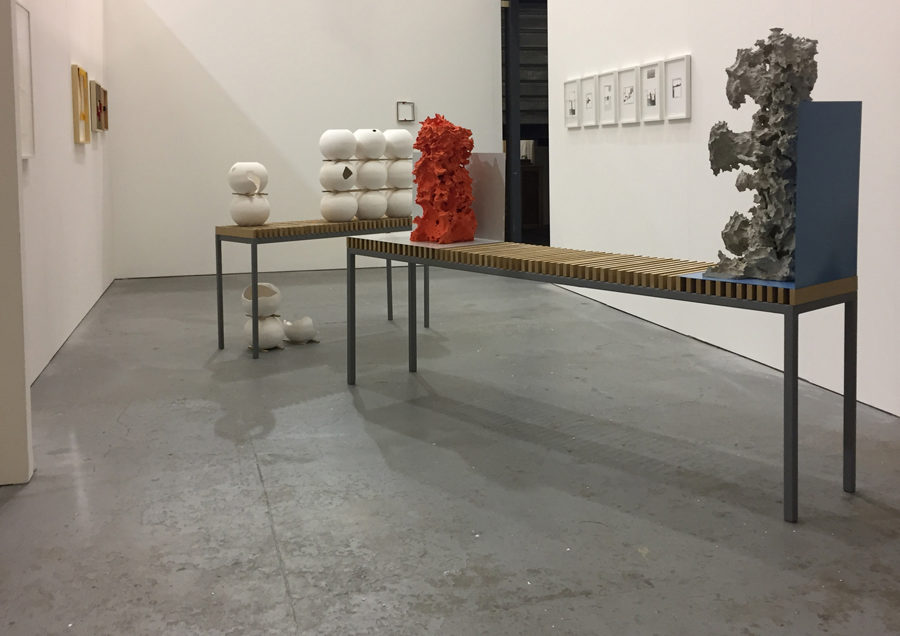 I’m showing in Sunday Art Fair with my Milano gallery, Renata Fabbri arte contemporanea, in a 2-person booth with Florian Roithmayr. Florian’s work is gorgeous, made via a fascinating set of processes, and with sharp thinking behind it. I’m completely in love with his recent works, some of which will be on view at the fair. The gallery describes our pairing thus: Although embracing different languages, these two artists share a set of movements, gestures and strategies defining their respective practices, both visually and conceptually. They both explore reciprocities between positive and negative, cavity and volume, absence and presence, subject and context, therefore embodying a similar tension towards binary configurations and possibilities.

Sounds good to me.

The Preview is on Thursday, 4th October, 12-6pm and that eveing the fair is on until 10pm. After that, the opening hours are Friday and Saturday 12-8pm and Sunday 12-6.

I’ll be there most of the day on Thursday, and again at the weekend.

And here are some booth shots: 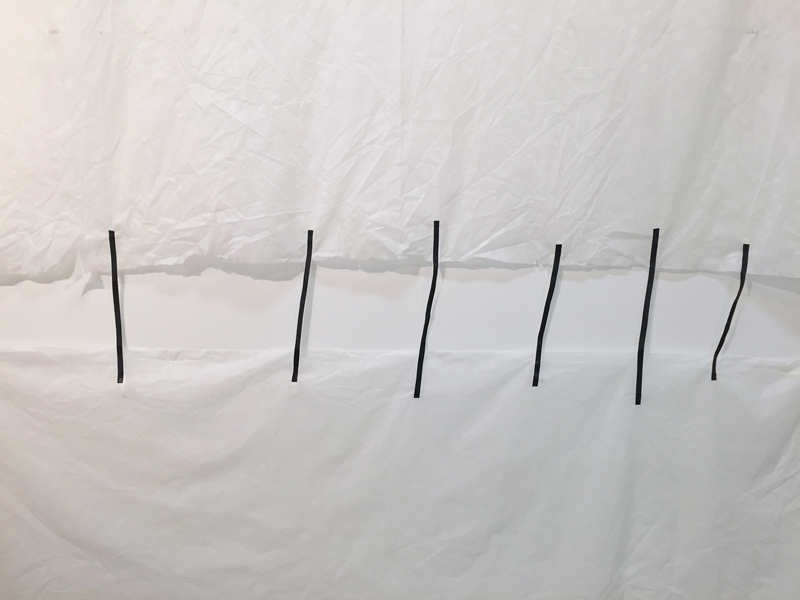 My show Extentions at the Museum of Contemporary Art Zagreb (MSU Zagreb) has been extended until the end of March.

Some photos of the show can be seen here. 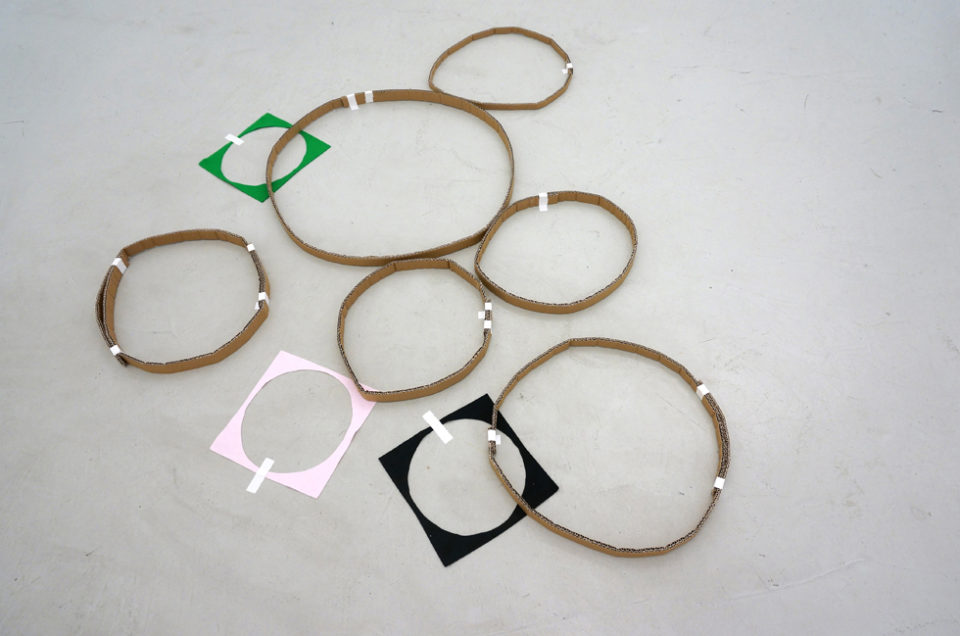 A couple of press things for my show in Milan:

Elena Bordignon chatted with me over email for ATP Diary:

(the English version is below the Italian)

If this item is still pinned on top of the news section, it means you are looking at the ‘pre-launch’ version of the site.

Some things aren’t yet working the way I would like – such as filtering of projects by year and by category – and I’m still in the process of uploading all the materials.

But in spite of it not being ‘done’ yet, I made the site live because I’ve been without it for too too long, after a massive hack attack took down my old site at the end of last year.

Bear with me while I get the navigation glitches resolved and get the rest of the stuff up.

And if you came here looking for something specific and can’t find it, do email me and I’ll try to get you the info.